(an'ă-tom'ik snŭf'boks),
A hollow seen on the radial aspect of the wrist when the thumb is extended fully; it is bounded by the prominences of the tendon of the extensor pollicis longus posteriorly and of the tendons of the extensor pollicis brevis and abductor pollicis longus anteriorly. The radial artery crosses the floor that is formed by the scaphoid and the trapezium bones.
Synonym(s): tabatière anatomique
Farlex Partner Medical Dictionary © Farlex 2012
A triangular depression on the dorsal pollicar aspect of the hand when the thumb is fully extended
Segen's Medical Dictionary. © 2012 Farlex, Inc. All rights reserved.

(an'ă-tom'ik snŭf'boks)
A hollow seen on the radial aspect of the wrist when the thumb is extended fully.
Medical Dictionary for the Health Professions and Nursing © Farlex 2012 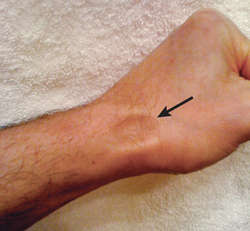