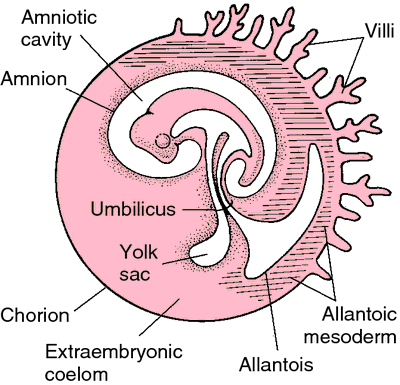 Amnion, chorion, and other embryonic membranes surrounding the embryo of a placental mammal. From Dorland's, 2000.
amnion nodo´sum a nodular condition of the fetal surface of the amnion, usually appearing near the insertion of the cord; it may be associated with multiple congenital abnormalities, especially hypoplastic kidneys and oligohydramnios.
Miller-Keane Encyclopedia and Dictionary of Medicine, Nursing, and Allied Health, Seventh Edition. © 2003 by Saunders, an imprint of Elsevier, Inc. All rights reserved.

(am'nē-on),
Innermost of the extraembryonic membranes enveloping the embryo in utero and containing the amniotic fluid; it consists of an internal embryonic layer with its ectodermal component and an external somatic mesodermal component; in the later stages of pregnancy the amnion expands to come in contact with and partially fuse to the inner wall of the chorionic sac; derived from the trophoblast cells.
Synonym(s): amnionic sac
[G. the membrane around the fetus, fr. amnios, lamb]
Farlex Partner Medical Dictionary © Farlex 2012

(ăm′nē-ən, -ŏn′)
n. pl. am·nions or am·nia (-nē-ə)
A thin, tough, membranous sac that encloses the embryo or fetus of a mammal, bird, or reptile. It is filled with a serous fluid in which the embryo or fetus is suspended.
am′ni·ot′ic (-ŏt′ĭk), am′ni·on′ic (-ŏn′ĭk) adj.
The American Heritage® Medical Dictionary Copyright © 2007, 2004 by Houghton Mifflin Company. Published by Houghton Mifflin Company. All rights reserved.

(am'nē-on)
Innermost of the extraembryonic membranes enveloping the embryo and later the fetus, containing the amnionic fluid; it consists of an internal embryonic layer with its ectodermal component, and an external somatic mesodermal component; in the later stages of pregnancy, the amnion expands and partially fuses to the inner wall of the chorionic sac; derived from the trophoblast cells.
Synonym(s): amnionic sac.
[G. the membrane around the fetus, fr. amnios, lamb]
Medical Dictionary for the Health Professions and Nursing © Farlex 2012

One layer of the fluid-filled double membrane surrounding the fetus before birth. The amnion is the inner of two membranes, the other being the chorion. The membranes normally rupture and release the AMNIOTIC FLUID (‘breaking of the waters’ before the baby is born.
Collins Dictionary of Medicine © Robert M. Youngson 2004, 2005

Fig. 30 Amnion . A vertebrate embryo lying within the amnion.

an embryonic, fluid-filled sac which occurs in reptiles, birds and mammals (AMNIOTES). Formed from ECTODERM and MESODERM and containing a coelomic space (see COELOM), the amnion grows around the embryo and eventually roofs over and completely encloses it. It provides the fluid-filled space necessary for the development of the embryo of a land animal, and it also acts as a protective cushion.
Collins Dictionary of Biology, 3rd ed. © W. G. Hale, V. A. Saunders, J. P. Margham 2005

Q. what does it mean when an ultrasound shows an empty amniotic sac and no baby?

A. This exact thing happened with my friend who is now 22 weeks with her first baby. She had 2 additional sacs - both empty - and the doctor said that the pregnancy had probably started out as triplets but that only one of the embryos had actually established and continued to grow.

Her doctor said it is very common for a woman to have more than one egg fertilize but that in most cases the pregnancy continues as a singleton only. She told my friend that the empty sacs would just disappear through time (which they did) and that they posed no danger to her baby.
More discussions about amnion
This content is provided by iMedix and is subject to iMedix Terms. The Questions and Answers are not endorsed or recommended and are made available by patients, not doctors.

Feedback
Flashcards & Bookmarks ?
Please log in or register to use Flashcards and Bookmarks. You can also log in with
Flashcards ?
My bookmarks ?
+ Add current page to bookmarks
Mentioned in ?
References in periodicals archive ?
Paired f-test was used to analyze differences between amniotic regions (reflected versus placental amnion) and oxygen tensions (5% versus 20% oxygen).
Values were always higher in placental amnion hAMSCs, and the effect was most pronounced in P-hAMSCs incubated at 20% [O.sub.2] (Figure 1(a)).
Calculation of the phosphorylation-related respiration showed a drastic increase in cells incubated at 20% [O.sub.2], and this effect was most pronounced in hAMSCs of placental amnion (Figure 1(d)).
Measurement of immunoactive substances after 4 days showed significantly higher concentrations of IL-6 in the cell culture supernatant of hAMSCs of placental amnion compared to hAMSCs from reflected amnion (Figure 4(a)).
Interestingly, this effect was more pronounced in hAMSCs derived from placental amnion. This is in line with previous reports, suggesting the need for low oxygen cell culture conditions, similar to the physiological stem cell niche [59].
Lactate concentrations in the supernatants were not influenced by oxygen tension, neither in reflected nor in placental amnion. This is not surprising since 5% oxygen is considered to be the physiological oxygen tension for amniotic cells.
Oxygen Tension Strongly Influences Metabolic Parameters and the Release of Interleukin-6 of Human Amniotic Mesenchymal Stromal Cells In Vitro
Given the important role of the amnion in the maintenance of pregnancy and parturition, investigation into molecular events occurring in this tissue may contribute to a beTher understanding of physiological and pathological processes involved in pregnancy.
Considering that the amniotic fluid is in a constantly changing state, it may be critical that the amnion properly responds to environmental cues from the amniotic fluid to accommodate the dynamic needs of the fetus, which could be mediated through epigenetic processes.
In this study, we performed genome-wide methylation profiling of human term and preterm amnion in order to explore the possible importance of DNA methylation in physiologic labor as well as the etiology of PTB.
Each placenta was dissected into fetal (amnion, chorion) and maternal (decidua basalis) components within an hour of delivery.
The samples examined included 9 individual and 1 pooled amnion samples each from the TNL and TL groups, one pooled amnion sample from the PTL group obtained by combining 6 individual samples, and 3 controls (methylated DNA control treated with M.SssI methyltransferase (New England Biolabs, Ipswich, MA, USA), Universal Methylated Human DNA Standard (Zymo Research), and bisulfite-untreated control).
Genome-wide analysis of DNA methylation in human amnion
At that point in monochorionic-diamniotic pregnancies, the amnion is a thin sonolucent line within the chorion.
Chorionicity, Amnionicity Clear by 10 Weeks' Gestation