[ar´wa]
1. the passage by which air enters and leaves the lungs.
2. a mechanical device used for securing unobstructed respiration when the patient is not breathing or is otherwise unable to maintain a clear passage, such as during general anesthesia or respiratory arrest.
Oropharyngeal Airway. This device is inserted into the mouth to prevent the tongue from obstructing the pharynx. 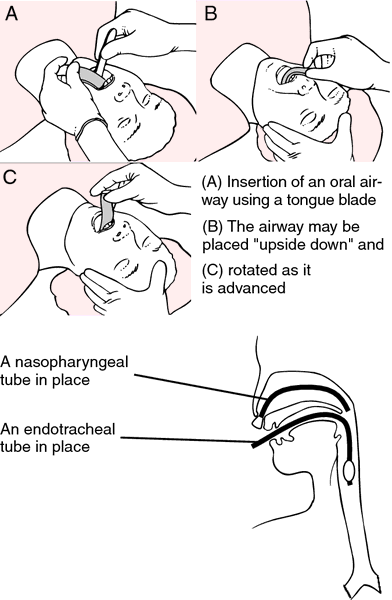 Esophageal airway.
It should not be used on alert or semiconscious patients, as it invariably stimulates the gag reflex and causes vomiting or injury to the jaw unless the patient is deeply unconscious.

Selection of proper size is essential because an airway that is too short cannot lift the tongue away from the oropharynx. The airway should be gently inserted so as to avoid trauma to the mucous membranes. It must be inserted with the tip up and rotated 180 degrees when it reaches the back of the throat so that the tongue is not displaced back into the pharynx, where it will obstruct the air passage. The proper size is the distance from the earlobe to the edge of the mouth.
Esophageal Obturator Airway. This is a hollow tube inserted into the esophagus to maintain airway patency in unconscious persons and to permit positive-pressure ventilation through the face mask connected to the tube. It was designed to be used by trained pre-hospital medical personnel to establish an airway. Its use has declined because of training of pre-hospital medical personnel in the insertion of endotracheal tubes, and because studies have suggested poor performance.
Esophageal Gastric Tube Airway. This is a hollow tube with a balloon at the end, which is blindly inserted into the esophagus, obstructing the esophagus and theoretically forcing air into the trachea, thus decompressing the stomach and alleviating abdominal distention; it represents an improvement in the design of the esophageal obturator airway. Ventilation occurs in the oropharynx.
Nasopharyngeal Airway. This is a hollow tube placed through the nose into the nasopharynx to bypass upper airway obstruction or to decrease trauma from nasotracheal suctioning.
Endotracheal Tube (or Airway). This inflatable tube is inserted into the mouth or nose and passed into the trachea to provide mechanical ventilation, to provide a suction route, to prevent aspiration of stomach contents, and to bypass upper airway obstruction.
Tracheostomy. This involves a surgical incision into the trachea and insertion of a metal or plastic tube through the incision. (See also tracheostomy.)
airway clearance, ineffective a nursing diagnosis accepted by the North American Nursing Diagnosis Association, defined as inability by an individual to clear secretions or obstructions from the respiratory tract to maintain a clear airway. Etiologic factors include decreased energy and fatigue; infection, obstruction, or excessive secretions in the tracheobronchial tree; perceptual/cognitive impairment associated with decreased oxygenation to brain cells; and trauma to the respiratory tract.

Defining characteristics presented by a person with ineffective airway clearance are likely to include abnormal breath sounds, alterations in respiratory rate or depth, cough (effective or ineffective and with or without sputum), cyanosis, dyspnea, and possibly fever.
Patient Care. Goals and outcome criteria for planning and interventions to prevent, minimize, or alleviate ineffective airway clearance will depend on the patient's medical diagnosis, specific nursing diagnoses, and related pathophysiology. In general, the goals are to promote the movement of air in and out of the lungs; prevent development of infection, atelectasis, and accumulations of stagnant secretions in the lungs; and encourage preventive and therapeutic pulmonary hygiene to maintain good ventilation.

Some appropriate nursing interventions to accomplish these goals might include teaching the patient effective coughing practices, assisting with postural drainage and other techniques used by the respiratory therapist to remove secetions from the respiratory tract, helping the patient to stop smoking, helping the patient identify and avoid allergens in the environment, maintaining a clean and infection-free environment, repositioning and encouraging early ambulation in post-surgical patients, and providing instruction in ways to avoid extreme fatigue in patients with chronic obstructive pulmonary disease.
conducting airway the lower and upper airways together, from the nares to the terminal bronchioles.
lower airway the airway from the lower end of the larynx to the ends of the terminal bronchioles.
upper airway the airway from the nares and lips to the larynx.

(ār'wā),
1. Any part of the respiratory tract through which air passes during breathing.
2. In anesthesia or resuscitation, a device for correcting obstruction to breathing, especially an oropharyngeal and nasopharyngeal airway, endotracheal airway, or tracheotomy tube.

(ār'wā)
1. Any part of the respiratory tract through which air passes during breathing.
2. anesthesia During resuscitation, a type of device to correct obstruction to breathing, especially an oropharyngeal, nasopharyngeal, or endotracheal airway, or tracheotomy tube. 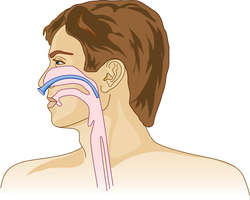 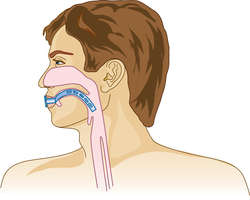 A device used as an alternative to tracheal intubation in the ventilation of the critically ill. It contains both an esophageal and a tracheal lumen and may be inserted without visualization of the vocal cords.
Synonym: supraglottic airway

1. The passages from the nose and mouth down to the air sacs in the lungs, by way of which air enters and leaves the body.
2. A curved plastic air tube often used by anaesthetist to prevent the tongue from falling back and obstructing breathing.

(ār'wā)
1. Any part of the respiratory tract through which air passes during breathing.
2. In anesthesia or resuscitation, device to correct obstruction to breathing, especially an oropharyngeal and nasopharyngeal airway, endotracheal airway, or tracheotomy tube.

Feedback
Flashcards & Bookmarks ?
Please log in or register to use Flashcards and Bookmarks. You can also log in with
Flashcards ?
My bookmarks ?
+ Add current page to bookmarks
TheFreeDictionary presents:
Write what you mean clearly and correctly.
Mentioned in ?
References in periodicals archive ?
In conclusion, the factors for continuous improvement in anesthesiologists' successfully managing difficult airway situations are manifold, including comprehension of the problems; use of assessment tests with good predictive ability; evolution of universally applicable management strategies and acquisition of practical skills; and development of new airway devices with better performance characteristics.[1],[26] Patient safety during airway management should not rely on a single specific technique/strategy.
Tracheal Intubation Awake or Under Anesthesia for Potential Difficult Airway: Look Before You Leap
At baseline, the average CPAP level needed to prevent airway obstruction was about 12 cm H20.
Lung volume and obstructive sleep apnea
With a 100% silicone cuff and airway tube, the LMA Protector Airway is designed for easy, rapid insertion and a secure fit, even in difficult airway situations.
Teleflex Launches LMA Protector Airway
Confidence in performance of an urgent surgical airway was felt by 63% of respondents, with all ENT surgeons and 60% of non-ENT surgeons expressing this view.
Survey of airway skills of surgeons in Western Australia
Quality of life and capsaicin sensitivity in patients with sensory airway hyperreactivity.
Changes in levels of nerve growth factor in nasal secretions after capsaicin inhalation in patients with airway symptoms from scents and chemicals
However, when the clinician needs to perform a more detailed evaluation (e.g., examination of the lower trachea and distal airways), additional anesthesia is necessary.
Office evaluation of the tracheobronchial tree
The Flutter[R] Device is a form of PEP employing deep breathing, and forced exhalation to achieve airway clearance.
"Spare the cough, spoil the airway:" back to the basics in airway clearance. (Continuing Education Series)
Etihad Airways had in May confirmed its interest to reinvest in a minority stake in Jet Airways, subject to conditions.
Etihad, Hinduja to discontinue talks to resurrect Jet Airways
"At Jet Airways, we continue to focus on our key priorities areas of customer satisfaction, network optimisation and driving operational efficiencies.
India : Jet Airways records fifth consecutive profitable quarter; posts Rs.126 cr net profit in Q1 of FY17
Naresh Goyal, chairman of Jet Airways, said: "Jet Airways has strengthened its core operations and achieved better capacity utilisation and greater efficiency.
Efficiency, cost cuts drive Jet Airways profits
The strategic investment of Etihad Airways into Jet Airways is delivering strong results for both airlines across areas including network growth, revenue enhancement and operational and cost improvements.
Etihad and Jet reap rewards from alliance
The investment of Etihad Airways into Jet Airways is claimed to be delivering strong results for both airlines across areas, including network growth, revenue enhancement and operational and cost improvements, senior executives from the airlines say.
Jet, Etihad partnership delivers strong results for Indian carrier