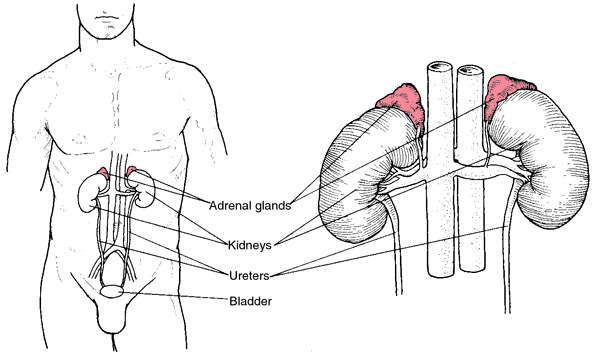 Another factor that influences the secretory rates of CRH, ACTH, and cortisol is a biologic clock mechanism that establishes a cyclic pattern of signals from the hypothalamus. This is a 24-hour cycle that has its peak right after completion of the major portion of a night's sleep, usually around 4 or 5 AM. About 12 hours later, the blood level of cortisol is at its lowest. This cycle is dependent on sleeping patterns; therefore, if a person changes the pattern and sleeps in the daytime, the cycle of hormonal levels changes accordingly. This information is significant in testing for cortisol levels as a means of diagnosing a disorder of the endocrine system. When blood is drawn for testing, the specimen should be clearly labeled as to the precise time it was taken.
Mineralocorticoids. The principal mineralocorticoid is aldosterone. This and other mineralocorticoids prevent excessive loss of sodium and chloride in the urine by enhancing their reabsorption from the distal ends of the renal tubules. They have the same effect to a lesser degree on the sweat and salivary glands and on the intestines. Additionally, aldosterone promotes excretion of potassium in the urine. The net result of these activities is the maintenance of fluid and electrolyte balance in the blood and extracellular fluid, which, in turn, affects cardiac output and blood pressure. A deficit of aldosterone secretion brings about a decrease in extracellular fluid and blood volumes, interference with the venous return to the heart, and a fall in cardiac output. If not corrected, the patient rapidly goes into profound shock.
Dysfunction of the Adrenal Glands. Either increased levels or deficits of the adrenal hormones can produce various disorders. cushing's syndrome, called also primary aldosteronism, is related to excessive secretion of aldosterone. In addison's disease there is an overall hypofunction of the adrenal cortex, resulting in insufficient production of all three groups of adrenocortical hormones. adrenogenital syndrome, which is usually caused by a tumor of the adrenal cortex, results from excessive secretion of androgens. Since androgens have a masculinizing effect, the symptoms are primarily those of changes in the secondary sex characteristics.
Miller-Keane Encyclopedia and Dictionary of Medicine, Nursing, and Allied Health, Seventh Edition. © 2003 by Saunders, an imprint of Elsevier, Inc. All rights reserved.

(ă-drē'năl)
1. Near or on the kidney; denoting the suprarenal (adrenal) gland.
2. A suprarenal gland or separate tissue or product thereof.
See also: suprarenal
[L. ad, to, + ren, kidney]
Medical Dictionary for the Health Professions and Nursing © Farlex 2012

Refers to the glands which sit on top of each kidney and that secrete various hormones.
Mentioned in: Hyperaldosteronism
Gale Encyclopedia of Medicine. Copyright 2008 The Gale Group, Inc. All rights reserved.