[o´vĭ-dukt]
1. fallopian tube.
2. in nonmammals, a passage through which ova leave the maternal body or pass to an organ communicating with the exterior of the body. adj., adj ovidu´cal, oviduc´tal.

[TA]
one of the tubes leading on either side from the upper or outer extremity of the ovary, which is largely enveloped by its expanded infundibulum, to the fundus of the uterus; it provides the path by which the ovum travels from ovary to uterus where, if it is fertilized in the tube, it will implant as a zygote; it consists of infundibulum, ampulla, isthmus, and uterine parts.
Synonym(s): tuba uterina [TA], salpinx ☆ , fallopian tube, gonaduct (2) , oviduct, salpinx uterina, tuba fallopiana, tuba fallopii

(ō′vĭ-dŭkt′)
n.
A tube through which eggs pass from an ovary, such as a fallopian tube in a mammal.
o′vi·duc′tal adj.

Zoology
The duct through which eggs pass to an animal’s exterior.

(yū'tĕr-in tūb) [TA]
One of the tubes leading on either side from the upper or outer extremity of the ovary, which is largely enveloped by its expanded infundibulum, to the fundus of the uterus; it consists of infundibulum, ampulla, isthmus, and uterine parts.
Synonym(s): salpinx (1) [TA] , fallopian tube, gonaduct (2) , oviduct. 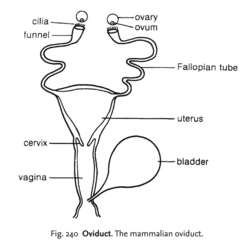 a tube that carries the egg to the exterior or, in the case of mammals, to the lower part of the tube, the UTERUS, where it becomes implanted in the wall lining (ENDOMETRIUM) if FERTILIZATION has occurred. Usually oviducts are paired, but only one is present in birds. In higher mammals it is divided into an upper FALLOPIAN TUBE, which is ciliated, and into which the egg passes from the COELOM, a middle uterus, where the embryo develops, and a vagina leading to the exterior.

A. i think that was an ectopic pregnancy. of course she can get pregnant again, although the past history of tubal pregnancy increases the risk of developing another ectopic pregnancy in the future. but don't worry, all your sister need to is always consult her health and future-pregnancy condition with her ob-gyn specialist.

i believe that what happened to your sister was non-complicated ectopic pregnancy, because the doctor was just doing the minimal invasive surgery in her fallopian tube. it still has the risks of having another ectopic one in her future pregnancy, but with a complete medical check-up and work-up, i'm sure she will just be doing well.

i just wrote a brief note about ectopic pregnancy, in case you want to read that :
http://doctoradhi.com/blog/2009/01/ectopic-pregnancy/
More discussions about oviduct