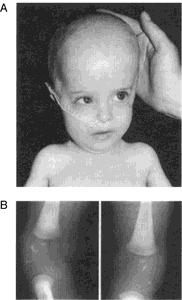 A, Facies of an infant with Zellweger syndrome showing a prominent forehead. B, Radiography of the knee of a newborn infant with Zellweger syndrome showing abnormal punctate calcification of the distal femoral epiphyses. From Mueller and Young, 2001.
Miller-Keane Encyclopedia and Dictionary of Medicine, Nursing, and Allied Health, Seventh Edition. © 2003 by Saunders, an imprint of Elsevier, Inc. All rights reserved.

(zel'weg-ĕr),
a metabolic disorder with neonatal onset, characterized by distinctive facies, muscular hypotonia, hepatomegaly with jaundice, renal cysts, epiphyseal stippling of the patellae, cerebral dysmyelination, and neuronal migration defects and psychomotor retardation; there is a perturbation in peroxisomal biogenesis; autosomal recessive inheritance, caused by mutation in any one of several peroxin (PEX) genes on chromosome 6, 7, 8, or 12.
Synonym(s): cerebrohepatorenal syndrome

A gene on chromosome 7q21.2 that encodes peroxin-1, a protein of the AAA ATPase family, which have various cell functions. This cytoplasmic protein forms heteromeric complexes with the peroxisomal membrane, where it plays a role in peroxisome biogenesis and in importing proteins into peroxisomes.