(fŏks′glŭv′)
n.
Any of several herbs of the genus Digitalis, especially D. purpurea of Europe and northern Africa, having a long cluster of large, tubular, pinkish-purple flowers and leaves that are the source of the drug digitalis. Also called digitalis.
Herbal medicine A biennial herb that contains the prototypic cardioactive glycoside, digitalis, gitaloxin, gitoxin; it is no longer administered as an herb, given its cardiotoxicity
Toxicity Anorexia, drowsiness, impaired vision, nausea, and vomiting; when the intoxication is extreme, tachyarrhythmias, ventricular fibrillation, cardiovascular collapse, possibly death
Homeopathy See Digitalis

(dij'i-tā'lis)
A perennial flowering plant that is the main source for some cardioactive steroid glycosides useful in therapy for coronary heart failure and other cardiac disease.
Synonym(s): foxglove.
[L. digitalis, relating to the fingers; in allusion to the fingerlike flowers] 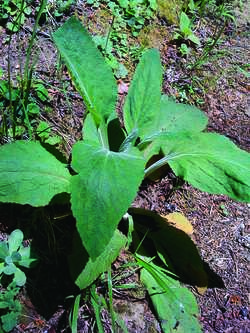 (fŏks′glŏv)
The common name for the flowering plant Digitalis purpurea, from which digitalis is obtained.
See: illustration