[tri″pan-o-so´mah]
a multispecies genus of protozoa parasitic in the blood and lymph of invertebrates and vertebrates, including humans; most species live part of their life cycle in the intestines of insects and other invertebrates, the typical adult stage being found only in the vertebrate host. T. gambien´se and T. rhodesien´se cause the Gambian and Rhodesian forms of African trypanosomiasis in humans, and T. cru´zi causes American trypanosomiasis. Other species cause diseases in domestic animals. 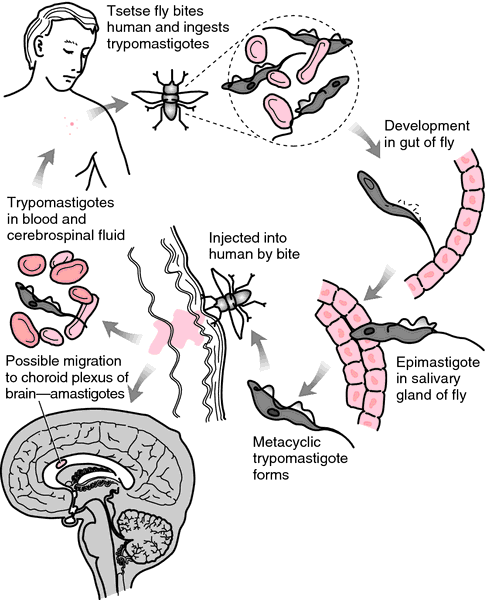 Life cycle of the etiologic agents of sleeping sickness (Trypanosoma gambiense and T. rhodesiense). From Mahon and Manuselis, 2000.
Miller-Keane Encyclopedia and Dictionary of Medicine, Nursing, and Allied Health, Seventh Edition. © 2003 by Saunders, an imprint of Elsevier, Inc. All rights reserved.

(tri-pan'ō-sō'mă, trip'ă-nō-),
A genus of asexual digenetic protozoan flagellates (family Trypanosomatidae) that have a spindle-shaped body with an undulating membrane on one side, a single anterior flagellum, and a kinetoplast; they are parasitic in the blood plasma of many vertebrates (only a few being pathogenic) and as a rule have an intermediate host, a bloodsucking invertebrate, such as a leech, tick, or insect; pathogenic species cause trypanosomiasis in humans and other diseases in domestic animals.
[G. trypanon, an auger, + sōma, body]
Farlex Partner Medical Dictionary © Farlex 2012

(trī-pan'ō-sō'mă)
A genus of asexual digenetic protozoan flagellates that are parasitic in the blood plasma of many vertebrates and as a rule have an intermediate host, a bloodsucking invertebrate such as a leech, tick, or insect; pathogenic species cause trypanosomiasis in humans.
[G. trypanon, an auger, + sōma, body]
Medical Dictionary for the Health Professions and Nursing © Farlex 2012 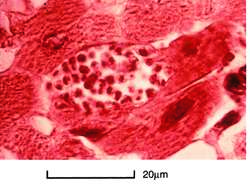 TRYPANOSOMA CRUZI: (Orig. mag. ×1000)
A genus of parasitic, flagellate protozoa found in the blood of many vertebrates, including humans. The protozoa are transmitted by insect vectors. The only two species relevant for disease in humans are T. brucei and T. cruzi. See: illustration

The causative agent of American trypanosomiasis (Chagas disease). It is transmitted by triatomids (bloodsucking insects of the family Reduviidae).
Medical Dictionary, © 2009 Farlex and Partners