[trik″o-mo´nas]
a genus of flagellate protozoa parasitic in birds and mammals, including humans. T. ho´minis and T. te´nax are nonpathogenic species found in the human mouth and intestines. T. vagina´lis is found in the vagina and male genital tract and is the cause of trichomoniasis. 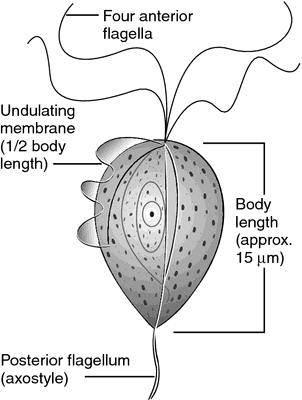 Schematic diagram of Trichomonas vaginalis. From Brunzel, 1994.
Miller-Keane Encyclopedia and Dictionary of Medicine, Nursing, and Allied Health, Seventh Edition. © 2003 by Saunders, an imprint of Elsevier, Inc. All rights reserved.

(trik'ō-mō'nas, trik'ō-mon'as), Although the correct pronunciation of this word is trichom'onas, the pronunciation shown is more commonly heard in the U.S.
A genus of parasitic protozoan flagellates (subfamily Trichomonidinae, family Trichomonadidae) causing trichomoniasis in humans, other primates, and birds. Specificity is more marked for its precise microhabitat than for host species. The genus has been divided into several genera: Trichomonas, Pentatrichomonas, Tetratrichomonas, and Tritrichomonas.
[tricho- + G. monas, single (unit)]
Farlex Partner Medical Dictionary © Farlex 2012

A benign trichomonad found in the large intestine.

A benign trichomonad that may be present in the mouth. 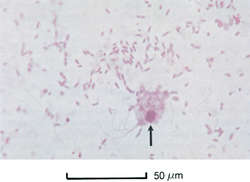 A species found in the vagina that produces discharge. T. vaginalis is fairly common in women, esp. during pregnancy or following vaginal surgery. It is sometimes found in the male urethra and may be transmitted through sexual intercourse. See: illustration; colpitis macularis

T. vaginalis causes persistent burning, redness, and itching of the vulvar tissue associated with a profuse vaginal discharge that may be frothy or malodorous or both. Occasionally, infection with T. vaginalis is asymptomatic.

Metronidazole (Flagyl) is taken orally by the woman and her sexual partner. The drug is contraindicated during the first trimester of pregnancy because of potential damage to the developing fetus; clotrimazole vaginal suppositories provide symptomatic relief during the first 12 weeks of gestation.

Alcohol should not be consumed during metronidazole therapy.
Medical Dictionary, © 2009 Farlex and Partners

a genus of parasitic protozoan occurring in the digestive and reproductive systems of humans and many other animals.
Collins Dictionary of Biology, 3rd ed. © W. G. Hale, V. A. Saunders, J. P. Margham 2005