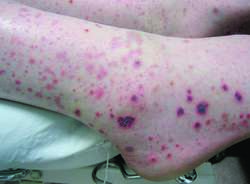 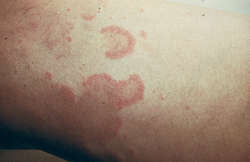 A relatively rare complication of severe rheumatoid arthritis, characterized by blood vessel inflammation, esp. in the skin, eyes (the sclera), and nerves. It can produce deep dermal ulcers, localized skin infarction, ischemia or necrosis of the fingertips, scleritis, and inflammation of multiple nerves (mononeuritis multiplex).
Medical Dictionary, © 2009 Farlex and Partners

Widespread inflammation of blood vessels occurring as the principal feature of a range of conditions including ERYTHEMA NODOSUM, POLYARTERITIS NODOSA, some forms of PURPURA, RHEUMATOID ARTHRITIS, TEMPORAL ARTERITIS and THROMBOANGIITIS OBLITERANS. In many cases vasculitis is caused by combinations of ANTIGENS and ANTIBODIES (immune complexes) that circulate in the blood until they settle on the wall of a small artery and excite a severe inflammatory response. Vasculitis is often treated with corticosteroid and other immunosuppressive drugs.
Collins Dictionary of Medicine © Robert M. Youngson 2004, 2005