[suk´sĭ-nāt]
any salt, ester, or anionic form of succinic acid.
Miller-Keane Encyclopedia and Dictionary of Medicine, Nursing, and Allied Health, Seventh Edition. © 2003 by Saunders, an imprint of Elsevier, Inc. All rights reserved. 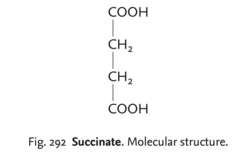 a 4-carbon DICARBOXYLIC ACID found in the KREBS CYCLE (see Fig. 292 ). It is formed from succinyl CoA by the ENZYME succinyl CoA synthetase. This is the only step in the cycle that directly yields a high energy bond. Succinate is subsequently oxidized to fumarate by the enzyme succinate DEHYDROGENASE.
Collins Dictionary of Biology, 3rd ed. © W. G. Hale, V. A. Saunders, J. P. Margham 2005

Feedback
Flashcards & Bookmarks ?
Please log in or register to use Flashcards and Bookmarks. You can also log in with
Flashcards ?
My bookmarks ?
+ Add current page to bookmarks
Mentioned in ?
References in periodicals archive ?
The binodal data obtained by the titration method for PEG 6000 + sodium succinate + water systems at various temperatures are given in Table 1 and are shown schematically in Figure 1.
where [W.sub.PEG] and [W.sub.S] are the weight percentages of PEG and sodium succinate, respectively.
where [V.sup.*.sub.123] is the effective excluded volume and MPEG and MS are the molecular weights of PEG and the sodium succinate, respectively.
In order to understand the effect of anion, the binodal curves of various salts having different anion and common sodium cation (sodium citrate, sodium tartrate, and sodium succinate) were plotted in Figure 2.
The tie-line compositions of the PEG 6000 + sodium succinate + water fitted with Othmer-Tobias equation (4) and Bancroft equation (5) [30, 31]
Liquid-liquid equilibrium of poly(ethylene glycol) 6000 + sodium succinate + water system at different temperatures