[stron″jĭ-loi´dēz]
a genus of nematode parasites. S. stercora´lis is a species found in the intestines of humans and other mammals in the tropics, and is the most common cause of strongyloidiasis. 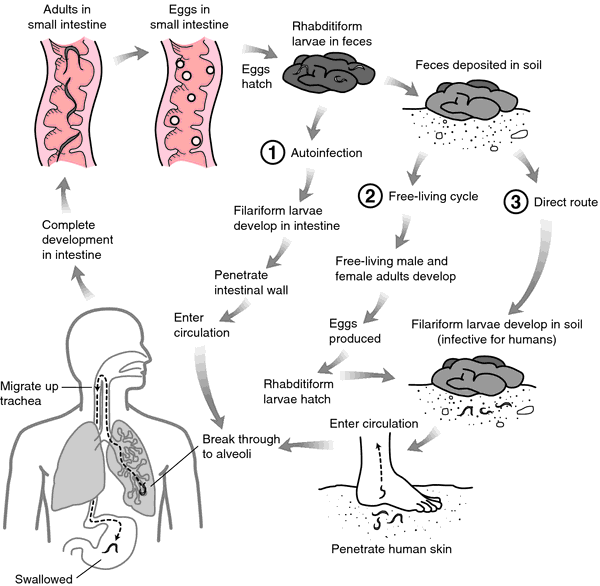 Life cycle of Strongyloides stercoralis. From Mahon and Manuselis, 2000.
Miller-Keane Encyclopedia and Dictionary of Medicine, Nursing, and Allied Health, Seventh Edition. © 2003 by Saunders, an imprint of Elsevier, Inc. All rights reserved.

(stron'ji-loy'dēz),
The threadworm, a genus of small nematode parasites (superfamily Rhabditoidea), commonly found in the small intestine of mammals (particularly ruminants), that are characterized by an unusual life cycle that involves one or several generations of free-living adult worms. Human infection is chiefly by S. stercoralis, the small human roundworm, widespread in all tropic regions, or by S. fuelleborni, a parasite of nonhuman primates in African and Asian tropics and of humans in African tropics. The subspecies S. fuelleborni kellyi occurs in New Guinea where it causes widespread infection. Fatal infection in 2-month-old infants, possibly infected by transmammary transmission, produces the condition known locally as swollen belly disease or swollen belly syndrome, which causes grossly distended abdomens, invariably fatal in these infants. Other species include S. papillosus in cattle, sheep, and goats, and S. ransomi in swine.
[G. strongylos, round, + eidos, resemblance]
Farlex Partner Medical Dictionary © Farlex 2012