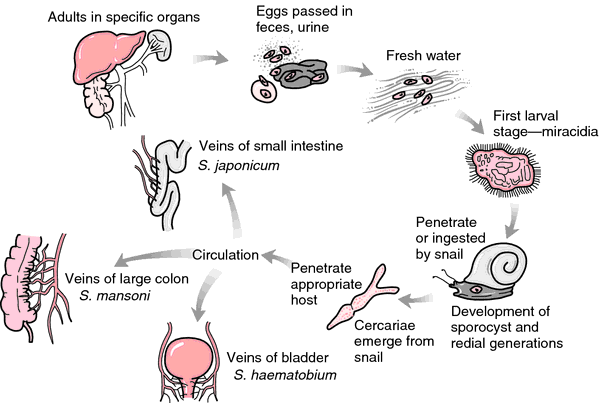 a common species of trematode characterized by large eggs with a strong lateral spine and transmitted by planorbid snails of the genus Biomphalaria; causes schistosomiasis mansoni in humans in Africa, parts of the Middle East, South America, and certain Caribbean islands.
Farlex Partner Medical Dictionary © Farlex 2012

(skis'tō-sō'mă man-sō'nī)
A common species of trematodes characterized by large eggs with a strong lateral spine and transmitted by planorbid snails of the genus Biomphalaria; causes schistosomiasis mansoni.
Medical Dictionary for the Health Professions and Nursing © Farlex 2012

Feedback
Flashcards & Bookmarks ?
Please log in or register to use Flashcards and Bookmarks. You can also log in with
Flashcards ?
My bookmarks ?
+ Add current page to bookmarks
Mentioned in ?
References in periodicals archive ?
CAP: cercariae antigen preparation, SWAP: soluble worm antigen preparation, and SEA: soluble egg antigen. Z and P values from the nonparametric Wilcoxon signed-rank tests comparing pre- and posttreatment antibody levels are shown for each antibody isotype.
Immunological consequences of antihelminthic treatment in preschool children exposed to urogenital schistosome infection
For example, Demaree and Hillyer (1981) showed by transmission electron microscopy that schistosome eggs had pores and that soluble egg antigen inside the egg would exit via the pores and react with the antibody immunoglobulin, forming the charactenstic and diagnostic precipitations outside the egg shells.
The rise and fall of Bilharzia in Puerto Rico: its centennial 1904-2004
mansoni infection, it has been suggested that interleukin (IL)-4 upregulates fibroblast chemokine, matrix protein expression, and collagen, which implies that IL-4 is a crucial cytokine for granuloma formation [15] and reduces the cellular proliferative response to soluble egg antigens (SEA) [13].
Cytokine pattern of T lymphocytes in acute Schistosomiasis mansoni patients following treated praziquantel therapy