Sideroblastic anemia is a term used to describe a group of rare blood disorders characterized by the bone marrow's inability to manufacture normal red blood cells.

Named for the Greek words for iron and germ, sideroblastic anemia is one of the principal types of iron-utilization anemia. Abnormal, iron-saturated red cells are present in the blood of people who have this disease. Although the iron circulates normally from the plasma to the bone marrow, where new red blood cells are created, it is not properly incorporated into new red blood cells.
Sideroblastic anemia can be inherited, but the disease is usually acquired as a result of illness or exposure to toxic substances.
Sideroblastic anemia is a disease of adults.

Possible complications of sideroblastic anemia include:

Blood tests are used to examine the appearance and other characteristics of red cells and to measure the amount of iron in the blood. Bone marrow biopsy is also used.

Acquired sideroblastic anemia may be cured when the condition that causes it is treated or removed.
If the cause of a patient's anemia cannot be determined, blood transfusions may be necessary. Medications are prescribed to stimulate excretion or excess iron that accumulates as a result of these transfusions.
In rare instances, treatment with oral pyridoxine (a B-complex vitamin) benefits patients whose sideroblastic anemia was present at birth. This treatment improves the condition of some patients but does not cure the anemia.

Sideroblastic anemia of unknown origin may lead to leukemia. It may take as long as 10 years for this disease progression to take place. 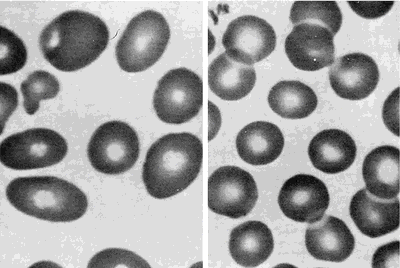 , sideroachrestic anemia (sid'ĕr-ō-blast'ik ă-nē'mē-ă, sid'ĕr-ō-ă-krest'ik)
Refractory anemia characterized by the presence of sideroblasts in the bone marrow.
Medical Dictionary for the Health Professions and Nursing © Farlex 2012