[hu´mer-us] (pl. hu´meri) (L.)
the bone of the upper arm, extending from shoulder to elbow, consisting of a shaft and two enlarged extremities. The proximal end has a smooth round head that articulates with the scapula to form the shoulder joint. Just below the head are two rounded processes called the greater and lesser tubercles; the area just below the tubercles is called the “surgical neck,” because of its liability to fracture. The distal end of the humerus has two articulating surfaces: the trochlea, which articulates with the ulna, and the capitulum, which articulates with the radius at the elbow. and see Appendices. 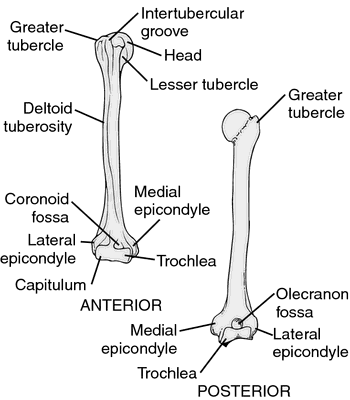 (hyū'mĕr-ŭs, -ī), [TA]
The bone of the arm, articulating with the scapula above and the radius and ulna below.
Synonym(s): arm bone
[L. shoulder]

(hyo͞o′mər-əs)
n. pl. hu·meri (-mə-rī′)
The long bone of the arm or forelimb, extending from the shoulder to the elbow.

(hyū'mĕr-ŭs) [TA]
The bone of the arm, articulating with the scapula above and the radius and ulna below.
[L. shoulder] HUMERUS
The bone of the upper arm; it articulates with the scapula at the shoulder and with the ulna and radius at the elbow. See: illustration

The constricted segment of the humerus between the head and the greater tubercle.

The long upper arm bone that articulates at its upper end with a shallow cup in a side process of the shoulder blade (scapula) and, at its lower end with the RADIUS and ULNA bones of the lower arm.

the bone of the vertebrate forelimb (or arm) nearest to the body, to which it is attached at the shoulder. It is attached distally to the RADIUS and ULNA at the elbow.

The bone of the upper arm.
Mentioned in: Osteomyelitis

Feedback
Flashcards & Bookmarks ?
Please log in or register to use Flashcards and Bookmarks. You can also log in with
Flashcards ?
My bookmarks ?
+ Add current page to bookmarks
TheFreeDictionary presents:
Write what you mean clearly and correctly.
Mentioned in ?
References in periodicals archive ?
The friend of mine with the digeridoo, an Afrikaner who's fascinated by the biblical Jews' wanderings through hostile lands, assembled a seder plate with me last year out of wasabi maror and a faux rhino horn for a shank bone.
Holiday in the Hinterland
"Typically he or she lacks one of the shank bones, all the hands and feet are abnormally small, finally they appear as stumps due to their close attachment to the body."
'It's admirable he adapted to work as a technician'
The old ones told me how to build the timber tripod and how to use a gas pipe stretched between the tendons and the shank bones. Broom handle sticks are tied to the rope ends, then worked as levers to raise and spread the legs.
Slaughter: on the properties generally required of the syntax of a formal system
That's a lot of eggs and bitter herbs and charoset and karpas and shank bones (which, in its singular form, would make for a decent high school band name).
New York Jews Will Spend Over $27 Million to Fill Their Seder Plates. That's a Whole Lotta Karpas!