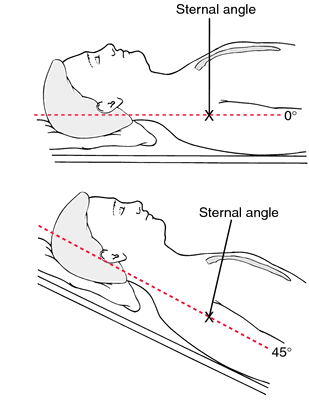 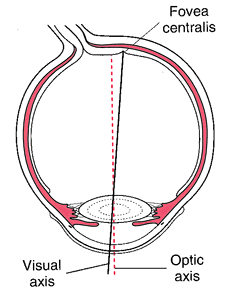 Axes of the eye. From Dorland's , 2000.
Miller-Keane Encyclopedia and Dictionary of Medicine, Nursing, and Allied Health, Seventh Edition. © 2003 by Saunders, an imprint of Elsevier, Inc. All rights reserved.

(ak'sis, ak'sēz), Do not confuse this word with access.
1. A straight line joining two opposing poles of a spheric body, about which the body may revolve.
2. The central line of the body or any of its parts.
3. The second cervical vertebra.
4. The vertebral column. Synonym(s): vertebra C2 ☆ , epistropheus, odontoid vertebra, second cervical vertebra, toothed vertebra, vertebra dentata
5. The central nervous system.
6. An artery that divides, immediately on its origin, into a number of branches, for example, celiac axis.
[L. axle, axis]
Farlex Partner Medical Dictionary © Farlex 2012

(ăk′sĭs)
n. pl. axes (ăk′sēz′)
1. A straight line about which a body or geometric object rotates or may be conceived to rotate.
2. A center line to which parts of a structure or body may be referred.
3. Anatomy
a. The second cervical vertebra on which the head turns.
b. Any of various central structures, such as the spinal column, or standard abstract lines used as a positional referent.
The American Heritage® Medical Dictionary Copyright © 2007, 2004 by Houghton Mifflin Company. Published by Houghton Mifflin Company. All rights reserved.

, pl. axes (ak'sis, ak'sēz)
1. A straight line joining two opposing poles of a spheric body, about which the body may revolve.
2. The central line of the body or any of its parts.
3. The vertebral column.
4. The central nervous system.
5. The second cervical vertebra.
Synonym(s): epistropheus, vertebra C2, vertebra dentata.
6. An artery that divides, immediately on its origin, into a number of branches, e.g., celiac axis.
See: trunk
Medical Dictionary for the Health Professions and Nursing © Farlex 2012

1. The second of the vertebrae of the spine, upon which the skull and first vertebra (ATLAS) can rotate. The axis bone has a short, stout vertical peg called the odontoid process around which the atlas can rotate.
2. An imaginary central line of a part or of the body.
3. The meridian in a CYLINDRICAL LENS that possesses no optical power. The curve of maximal power is at right angles to the axis.
Collins Dictionary of Medicine © Robert M. Youngson 2004, 2005

A line that passes through the center of the body or body part.
Mentioned in: Fractures
Gale Encyclopedia of Medicine. Copyright 2008 The Gale Group, Inc. All rights reserved.

, pl. axes (ak'sis, ak'sēz)
1. [TA] Straight line joining two opposing poles of a spheric body, about which the body may revolve.
2. Central line of the body or any of its parts.
3. [TA] Second cervical vertebra.
4. Vertebral column.
5. Central nervous system.
6. Artery that divides, immediately on its origin, into a number of branches, e.g., celiac axis.
Medical Dictionary for the Dental Professions © Farlex 2012