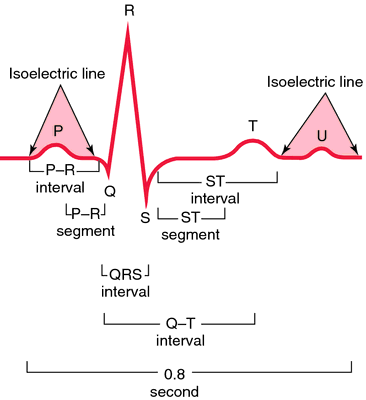 ECG, EKG Cardiology A non-invasive test of the electrical activity of heart's conduction system, which is transformed into recordings on graph paper–an electrocardiograph; in an EKG, electrodes–leads are placed on 12 specific sites of the body: standard limb leads–I, II, III, augmented limb leads–aVr , aVl, and aVf, and precordial or chest leads–V1 to V6; EKG tracings consist of 3 major components: the P wave, which indicates atrial depolarization, the QRS complex–ventricular depolarization, and the T wave–ventricular repolarization; the Holter monitor is a portable EKG recording device worn by an individual for continuous monitoring; the EKG is used to detect cardiac damage by evaluating alterations in the electrical conduction the heart, and can be performed at rest or during excercise–eg thallium stress test; the Holter monitor is a portable device worn by a Pt for continuous cardiac monitoring; the EKG is used to detect the presence and location of myocardial ischemia or infarction, cardiac hypertrophy, arrhythmias, conduction defects. See His bundle electrocardiography, Signal-averaged electrocardiography, Sleep electrocardiography.
McGraw-Hill Concise Dictionary of Modern Medicine. © 2002 by The McGraw-Hill Companies, Inc.

The tracing on paper, representing the electrical events associated with the heartbeats, produced by the ELECTROCARDIOGRAPH.
Collins Dictionary of Medicine © Robert M. Youngson 2004, 2005 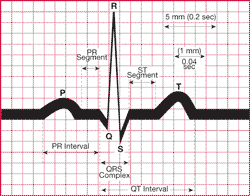