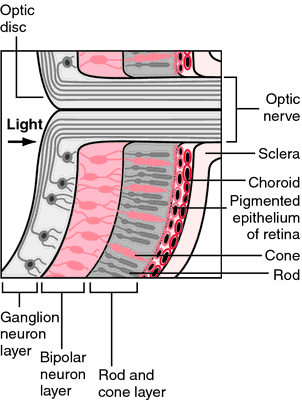 Structure of the retina showing the rods and cones. From Applegate, 2000.
Miller-Keane Encyclopedia and Dictionary of Medicine, Nursing, and Allied Health, Seventh Edition. © 2003 by Saunders, an imprint of Elsevier, Inc. All rights reserved.

(ret'i-nă), [TA]
Grossly, the retina consists of three parts: optic, ciliary, and iridial. The optic part, the physiologic portion that receives the visual light rays, is further divided into two parts, the pigmented part (pigment epithelium) and the nervous part, which are arranged in the following ten layers: pigmented layer; layer of inner and outer segments (of rods and cones); outer limiting layer (actually a row of junctional complexes); outer nuclear layer; outer plexiform layer; inner nuclear layer; inner plexiform layer; ganglionic (cell) layer; layer of nerve fibers; and inner limiting layer. Layers 2-10 comprise the neural layer. At the posterior pole of the visual axis is the macula, in the center of which is the fovea, the area of acute vision. Here, layers 6-9 and blood vessels are absent, and only elongated cones are present. About 3 mm medial to the fovea is the optic disc, where axons of the ganglionic cells converge to form the optic nerve. The ciliary and iridial parts of the retina are forward prolongations of the pigmented layer and a layer of supporting columnar or epithelial cells over the ciliary body and the posterior surface of the iris, respectively.
Synonym(s): optomeninx
[Mediev. L. prob. fr. L. rete, a net]
Farlex Partner Medical Dictionary © Farlex 2012

(ret'i-nă) [TA]
The light-sensitive membrane forming the innermost layer of the eyeball. Grossly, the retina consists of three parts: optic part of retina, ciliary part of retina, and iridial part of retina. The optic part, the physiologic portion that receives the visual light rays, is further divided into two parts, pigmented part (pigment epithelium) and nervous part, which are arranged in the following layers: 1) pigment epithelium; 2) layer of rods and cones; 3) external limiting lamina, actually a row of junctional complexes; 4) external nuclear lamina; 5) external plexiform lamina; 6) internal nuclear lamina; 7) internal plexiform lamina; 8) ganglionic cell lamina; 9) lamina of nerve fibers; 10) internal limiting lamina. Layers 2-10 comprise the nervous part. At the posterior pole of the visual axis is the macula, in the center of which is the fovea, the area of acute vision. Here layers 6-9 and blood vessels are absent, and only elongated cones are present. About 3 mm medial to the fovea is the optic disc, where axons of the ganglionic cells converge to form the optic nerve. The ciliary and iridial parts of the retina are forward prolongations of the pigmented layer and a layer of supporting columnar or epithelial cells over the ciliary body and the posterior surface of the iris, respectively.
[Mediev. L. prob. fr. L. rete, a net]
Medical Dictionary for the Health Professions and Nursing © Farlex 2012 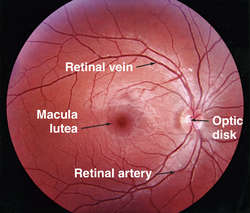 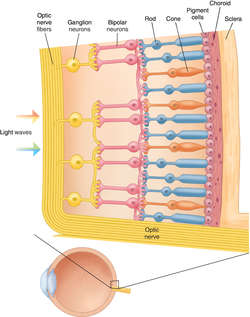 A retina having a spotted or striped appearance, seen in retinitis pigmentosa.
Medical Dictionary, © 2009 Farlex and Partners

The complex membranous network of nerve cells, fibres and photoreceptors that lines the inside of the back of the eye and converts optical images formed by the lens system of the eye into nerve impulses. The retina contains colour-blind but very sensitive rods and colour-sensitive cones and a computing system that refines the signals produced by these. The impulses leave each retina by way of about one million nerve fibres that form the optic nerve.
Collins Dictionary of Medicine © Robert M. Youngson 2004, 2005 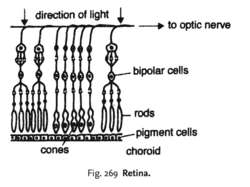 the lining of the interior of the vertebrate eye containing a concentration of photoreceptor cells known as rods and cones that are connected to the optic nerve via BIPOLAR CELLS. The retina lies immediately in front of the vascular choroid layer which nourishes it.
Collins Dictionary of Biology, 3rd ed. © W. G. Hale, V. A. Saunders, J. P. Margham 2005 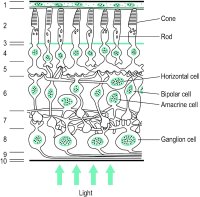