Dermatology A raised, red, highly vascularized skin bump seen in children, often at the site of trauma on the hands and arms or face, which bleeds easily, rarely exceeding 1 cm in diameter.
McGraw-Hill Concise Dictionary of Modern Medicine. © 2002 by The McGraw-Hill Companies, Inc. 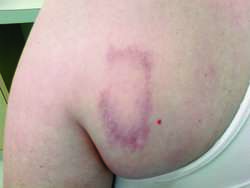 Feedback
Flashcards & Bookmarks ?
Please log in or register to use Flashcards and Bookmarks. You can also log in with
Flashcards ?
My bookmarks ?
+ Add current page to bookmarks
Mentioned in ?
References in periodicals archive ?
On the other hand, epidermal cysts, fibromas, fibrolipomas, neurinomas, schwannomas, and pyogenic granulomas were found to occur more frequently in males [Table 3].
Management of the Hand Tumors
Benign causes include umbilical hernias, cysts, teratomas, skin tags, angiomas, abscess, pyogenic granulomas, formation of an omphalith (due to concretions of the umbilicus), or endometriosis.
Sister Mary Joseph's Nodule: A short compilation
The inflammatory diseases of pediatric dermatology, such as acne, atopic dermatitis, psoriasis, and pyogenic granulomas, now are being treated with anti-inflammatory agents.
More than 50 years in pediatric dermatology
Traumatic/hyperplastic lesions were pyogenic granulomas in 8 cases, pseudoepitheliomatous hyperplasia in 10, verrucous hyperplasia in 6, fibroepithelial polyp in 3, and submucosal fibrosis in 3 cases.
A histomorphological study of benign lesions of oral cavity in a tertiary care hospital
Additional data from an unrelated case series found that use of topical timolol successfully treated pediatric pyogenic granulomas (Pediatric Dermatol.
Infantile hemangiomas benefit from beta-blockers
Pyogenic granulomas are benign exophytic vascular tumors first described by Poncet and Dor in 1897.
Pyogenic granuloma successfully cured by sclerotherapy: A case report
Pyogenic granulomas or lobular capillary hemangiomas are also benign vascular tumors of the skin and mucosa, which are thought to constitute only 0.5% of all childhood skin nodules and are characterized by rapid growth and a brittle surface.
Nasal tip infantile hemangioma, a case of mistaken identity
Pyogenic granulomas and hemangiomas of oral cavity are well-known benign lesions.
CAPILLARY HEMANGIOMA OF PALATE: A CASE REPORT
Mucoceles on the ventral surface of the tongue derived from the Blandin Nuhn glands are considered quite unusual (1), which because of their clinical characteristics and location may be confused for other pathologies like vascular lesions, pyogenic granulomas, squamous papillomas, among others.
Mucocele de las glandulas de Blandin Nuhn: descripcion de un caso
Newborns have thin nails and the nail can penetrate the proximal nail fold, causing these pyogenic granulomas," she said.
Dispensing tape effective for pediatric nail conditions
Interestingly, VEGF and bFGF expression has been shown to be higher in pyogenic granulomas during pregnancy, when steroid hormone levels are high, compared to expression in regressing pyogenic granulomas post partum.
Pyogenic granuloma occurring in a postmenopausal woman on hormone replacement therapy
Untreated pyogenic granulomas regress spontaneously within 6 to 18 months with some risk of scarring (SOR: C, a subset of patients in a retrospective cohort study).
Q/ What's the best treatment for pyogenic granuloma?