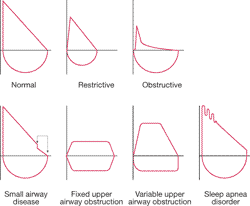 To assess respiratory function to assist in evaluating obstructive versus restrictive lung disease and to monitor and assess the effectiveness of therapeutic interventions.

Pulmonary function studies are classified according to lung volumes and capacities, rates of flow, and gas exchange. The exception is the diffusion test, which records the movement of a gas during inspiration and expiration. Lung volumes and capacities constitute the amount of air inhaled or exhaled from the lungs; this value is compared to normal reference values specific for the patient’s age, height, and gender. The following are volumes and capacities measured by spirometry that do not require timed testing.

The volumes, capacities, and rates of flow measured by spirometry that do require timed testing include the following:

Other studies for gas-exchange capacity, small airway abnormalities, and allergic responses in hyperactive airway disorders can be performed during the conventional pulmonary function study. These include the following:

Values are expressed in units of mL, %, L, L/sec, and L/min, depending on the test performed.

Note: See figure 1 showing some examples of PFT results presented in graphic form; the graphs assist in interpreting the findings and establishing the diagnosis of respiratory conditions.