A wart develops between 1 and 8 months after the virus becomes lodged in the skin. The virus is often spread by scratching, rubbing, and slight razor cuts. In more than half the cases, warts disappear without treatment, but some remain for years.
Treatment. Many popular “cures” for warts have been suggested, but are generally useless. Furthermore, self-treatment by cutting, scraping, or using acids or patent medicines may cause bacterial infection, scarring, and other harm without eliminating the warts. A troublesome wart should be removed only by a health care provider, who may use acids, electrodesiccation, or freezing with liquid nitrogen. Warts are notoriously stubborn. Often the virus remains in the skin, and the wart grows again.
genital w's condylomata acuminata.
plantar wart a viral epidermal tumor on the sole of the foot, sometimes the result of going barefoot; unlike other warts, this type is usually sensitive to pressure and may be painful during walking. Called also verruca plantaris.
venereal w's condylomata acuminata.
Miller-Keane Encyclopedia and Dictionary of Medicine, Nursing, and Allied Health, Seventh Edition. © 2003 by Saunders, an imprint of Elsevier, Inc. All rights reserved.

Verruca pedis Podiatry A virally-induced bump on the bottom of the foot, linked to the immune system, which either responds to minimal therapy or not. See Abracadabra therapy, Podophyllin.
McGraw-Hill Concise Dictionary of Modern Medicine. © 2002 by The McGraw-Hill Companies, Inc. 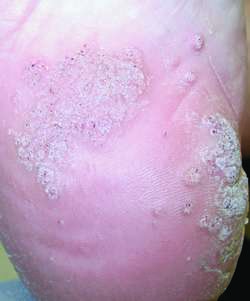 An ordinary wart (verruca) occurring on the sole of the foot and forced into the skin by pressure from the weight of the body.
Collins Dictionary of Medicine © Robert M. Youngson 2004, 2005