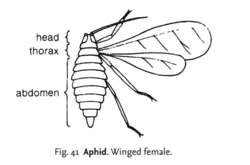 Feedback
Flashcards & Bookmarks ?
Please log in or register to use Flashcards and Bookmarks. You can also log in with
Flashcards ?
My bookmarks ?
+ Add current page to bookmarks
Mentioned in ?
References in periodicals archive ?
Life cycle variation and adaptation in jumping plant lice (Insecta: Hemiptera: Psylloidea): a global synthesis.
Taxonomy of Calophya (Hemiptera: Calophyidae) species associated with Schinus terebinthifolia (Anacardiaceae)
The Government is consulting on releasing the Japanese insect, a jumping plant lice called aphalara itadori, which is a sap-sucking natural predator for the rogue weed.
Fears over insect plan to tackle knotweed
FOREIGN "jumping plant lice" could be released in the UK to control the invasive Japanese knotweed, under plans being considered by the Government.
This weedy plan bugs me
Aphids, or Plant Lice, are tiny, usually greenish, soft-bodies sucking insects, found on the undersides of the leaves of sweet pea plants.
50 years: sweet pea
Tests confirmed the grape was not a merlot but a carmenere, which had disappeared from France during a phylloxera plant lice outbreak in the 1880s.
Home-grown grape