[ēr]
the organ of hearing and equilibrium. (See Plates.) It is made up of the outer (external) ear, the middle ear, and the inner (internal) ear.

The middle ear is separated from the outer ear by the eardrum. It contains the three ossicles, the malleus (hammer), incus (anvil), and stapes (stirrup), so called because of their resemblance to these objects. These three small bones form a chain across the middle ear from the eardrum to the oval window. The stapes causes a membrane in the oval window to vibrate, and the vibrations are transmitted to the inner ear. The middle ear is connected to the nasopharynx by the eustachian tube, through which the air pressure in the middle ear is equalized with the air pressure in the nose and throat. The middle ear is also connected with the cells in the mastoid bone just behind the outer ear. Two muscles attached to the ossicles contract when loud noises strike the tympanic membrane, limiting its vibration and thus protecting it and the inner ear from damage.

The inner ear (or labyrinth) contains the cochlea, as well as the nerves that transmit sound to the brain. It also contains the semicircular canals, which are essential to the sense of equilibrium.

When a sound strikes the ear it causes the tympanic membrane to vibrate. The ossicles function as levers, amplifying the motion of the tympanic membrane, and passing the vibrations on to the cochlea. From there the vestibulocochlear (eighth cranial) nerve transmits the vibrations, translated into nerve impulses, to the auditory center in the brain.
Diseases of the Ear. Infections and inflammations of the ear include otomycosis, a fungal infection of the outer ear; otitis media, infection of the middle ear; and mastoiditis, an infection of the mastoid cells. deafness may result from infection or from other causes such as old age, injury to the ear, hereditary factors, or conditions such as otosclerosis. Disorders of equilibrium may be caused by imperfect functioning of the semicircular canals or from labyrinthitis, an inflammation of the inner ear. Menière's disease, believed to result from dilatation of the lymphatic channels in the cochlea, may also cause disturbances in balance.
Surgery of the Ear. Surgical procedures on the ear usually are indicated for chronic infection or hearing loss. An exception is myringotomy, incision of the tympanic membrane, which is sometimes necessary to relieve pressure behind the eardrum and allow for drainage from an inflammatory process in the middle ear. Surgical procedures involving plastic reconstruction of the small bones of the middle ear are extremely delicate and have been made possible by the development of special instruments and technical equipment. stapedectomy and tympanoplasty are examples of this type of surgery, which has done much to preserve hearing that would otherwise be lost as a result of infectious destruction or sclerosis. Inner ear implants are now being performed to improve hearing in patients who have severe sensorineural hearing loss. Other surgical techniques for sensorineural hearing loss are in the developmental stage.
Patient Care. Care following surgery of the ear is aimed at preventing infection and promoting the comfort of the patient. Since the ear is so close to the brain, it is extremely important to avoid introducing pathogenic organisms into the operative site. The external ear and surrounding skin must be kept scrupulously clean. If the patient's hair is long it should be braided or arranged so that it does not come in contact with the patient's ear and side of the face. Aseptic technique must be used in all procedures carried out immediately before and after surgery.ƒ

The patient should be instructed to avoid nose blowing, especially after surgery, when there is a possibility that such an action can alter pressure within the ear. Observation of the patient after surgery of the ear includes assessing function of the facial nerve; evidence of dysfunction could include inability to wrinkle the forehead, close the eyes, pucker the lips, or bare the teeth. Any sign of facial nerve damage should be reported to the surgeon. vertigo is another common occurrence after surgery of the ear; it is usually only temporary and will subside as the operative site heals. The patient with vertigo requires special protective measures such as side rails and support when out of bed, so as to avoid falls or other accidental injuries.

Most surgeons prefer that the dressings around the ear not be changed during the immediate postoperative period. Should excessive drainage require more dressings, these can be applied over the basic dressing. Any drainage should be noted and recorded, with excessive drainage reported immediately to the surgeon. (See also care of the patient with hearing loss.) 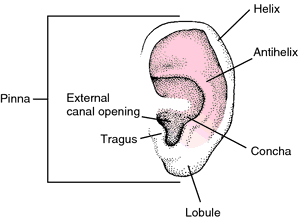 Anatomical features of the external ear. From Ignatavicius and Workman, 2002. 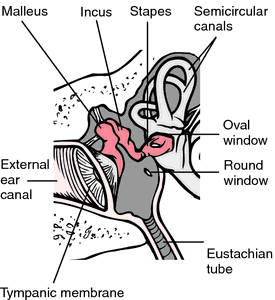 Structures of the middle ear.
beach ear otitis externa caused by irritation from ocean water and other beach conditions.
cauliflower ear a thickened and deformed ear caused by accumulation of fluid and blood clots in the tissue after repeated injury; it is most often seen in boxers, for whom it is almost an occupational hazard. The ear will not recover its normal shape but can be restored to normal by plastic surgery.
swimmer's ear (tank ear) otitis externa.
Miller-Keane Encyclopedia and Dictionary of Medicine, Nursing, and Allied Health, Seventh Edition. © 2003 by Saunders, an imprint of Elsevier, Inc. All rights reserved.

thickening and induration of the auricle with distortion of its contours secondary to extravasation of blood deep to the perichondrium.
Synonym(s): boxer's ear
Farlex Partner Medical Dictionary © Farlex 2012
An external ear—pinna—deformity caused by inadequate treatment— through-and-through stitches—of an otohematoma, with interruption of contact between the perichondrium and the underlying cartilage, resulting in a thickened ear
Aetiology Contact sports—wrestling, boxing-related trauma—in adolescents, or falls in the elderly and children; the natural evolution of haematomas in this site is toward granulation tissue and exuberant fibrosis; primary CE occurs in polychondritis
Segen's Medical Dictionary. © 2012 Farlex, Inc. All rights reserved.

Sports medicine An external ear–pinnae deformity caused by inadequate treatment– through-and-through stitches–of an otohematoma, with interruption of contact between the perichondrium and the underlying cartilage, resulting in a thickened ear Etiology Contact sports–wrestling, boxing-related trauma in adolescents, or falls in the elderly and children, the natural evolution of hematomas in this site is towards granulation tissue and exuberant fibrosis; primary CE occurs in polychondritis
McGraw-Hill Concise Dictionary of Modern Medicine. © 2002 by The McGraw-Hill Companies, Inc.

(kawl'i-flow-ĕr ēr)
Thickening and induration of the pinna and external ear with distortion of contours following extravasation of blood within its tissues; a chronic deformity following (usually) repeated trauma. Plastic or reconstructive surgery will generally improve appearance.
Medical Dictionary for the Health Professions and Nursing © Farlex 2012

The result of repeated blows to the ears with bleeding between the cartilage and the skin, and the subsequent organization of the blood clot into fibrous tissue. One of the least serious occupational hazards of boxing.
Collins Dictionary of Medicine © Robert M. Youngson 2004, 2005