a genus of imperfect fungi of the form-class Hyphomycetes; many species are commonly found in the human environment. Some are toxic, and others are sources of penicillins.
Miller-Keane Encyclopedia and Dictionary of Medicine, Nursing, and Allied Health, Seventh Edition. © 2003 by Saunders, an imprint of Elsevier, Inc. All rights reserved.

(pĕn′ĭ-sĭl′ē-əm)
n. pl. peni·cilliums or peni·cillia (-sĭl′ē-ə)
Any of various characteristically bluish-green fungi of the genus Penicillium that grow as molds on decaying fruits and ripening cheese and are used in the production of antibiotics such as penicillin and in making cheese.
The American Heritage® Medical Dictionary Copyright © 2007, 2004 by Houghton Mifflin Company. Published by Houghton Mifflin Company. All rights reserved.

(pen'i-sil'ē-ŭm)
A genus of fungi, some species of which yield various antibiotic substances and biologicals.
See: penicillus
Medical Dictionary for the Health Professions and Nursing © Farlex 2012 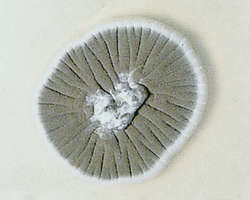 PENICILLIUM IN CULTURE
A genus of molds belonging to the Ascomycetes (sac fungi). They form the blue molds that grow on fruits, bread, and cheese. A number of species (P. chrysogenum, P. notatum) are the source of penicillin. Occasionally in humans they produce infections of the external ear, skin, or respiratory passageways. They are common allergens. See: illustration

A species that may cause systemic infections, esp. in immunocompromised patients. It is found most often in Southeast Asia, where it frequently infects patients with acquired immunodeficiency syndrome.
illustration
Medical Dictionary, © 2009 Farlex and Partners

One of a range of common blue-green moulds of the genus Penicillium , that grow on decaying fruits and ripening cheese. Penicillium species such as P. notatum and P. rubrum were originally studied by Fleming in investigating the properties of the antibiotic penicillin. (Alexander Fleming, 1881–1955, Scottish bacteriologist).
Collins Dictionary of Medicine © Robert M. Youngson 2004, 2005