Ophthalmoplegia is a paralysis or weakness of one or more of the muscles that control eye movement. The condition can be caused by any of several neurologic disorders. It may be myopathic, meaning that the muscles controlling eye movement are directly involved, or neurogenic, meaning that the nerve pathways controlling eye muscles are affected. Diseases associated with ophthalmoplegia are ocular myopathy, which affects muscles, and internuclear ophthalmoplegia, a disorder caused by multiple sclerosis, a disease which affects nerves.

Because the eyes do not move together in ophthalmoplegia, patients may complain of double vision. Double vision is especially troublesome if the ophthalmoplegia comes on suddenly or affects each eye differently. Because ophthalmoplegia is caused by another, underlying disease, it is often associated with other neurologic symptoms, including limb weakness, lack of coordination, and numbness.

Ocular myopathy is also known as mitochondrial encephalomyelopathy with ophthalmoplegia or progressive external ophthalmoplegia. Because it is so often associated with diseases affecting many levels of the neurologic system, it is often referred to as "ophthalmoplegia plus." The main feature is progressive limitation of eye movements, usually with drooping of the eyelids (ptosis). Ptosis may occur years before other symptoms of ophthalmoplegia. Because both eyes are equally involved and because ability to move the eyes lessens gradually over the course of years, double vision is rare. On examination, the eyelids may appear thin. This disease usually begins in childhood or adolescence but may start later.
When ophthalmoplegia is caused by muscle degeneration (myopathic), muscle biopsy, in which a small piece of muscle is surgically removed and examined microscopically, will find characteristic abnormal muscle fibers called ragged red fibers. In this form of ophthalmoplegia, the patient may experience weakness of the face, the muscles involved in swallowing, the neck, or the limbs.
Progressive external ophthalmoplegia is sometimes associated with specific neurologic syndromes. These syndromes include familial forms of spastic paraplegia, spinocerebellar disorders, or sensorimotor peripheral neuropathy. Kearns-Sayre syndrome causes ophthalmoplegia along with loss of pigment in the retina, the light-sensitive membrane lining the eye. In addition, the disease may cause heart block that must be corrected with a pacemaker, increased protein in the cerebrospinal fluid, and a progressively disabling lack of muscular coordination (cerebellar syndrome). Symptoms of the disease appear before age 15.
Some of the progressive external ophthalmoplegia syndromes are unusual in that inheritance is controlled by DNA in the mitochondria. The mitochondria are rod-shaped structures within a cell that convert food to usable energy. Most inherited diseases are passed on by DNA in the cell nucleus, the core that contains the hereditary material. Mitochondrial inheritance tends to be passed on by the mother. Other forms of progressive external ophthalmoplegia are not inherited but occur sporadically with no clear family history. It is not known why some forms are neurogenic and others are myopathic. In the forms inherited through mitochondrial DNA, it is not known which gene product is affected.
Internuclear ophthalmoplegia in multiple sclerosis is caused by damage to a bundle of fibers in the brainstem called the medial longitudinal fasciculus. In this syndrome, the eye on the same side as the damaged medial longitudinal fasciculus is unable to look outward (that is, the left eye cannot look left). The other eye exhibits jerking movements (nystagmus) when the patient tries to look left. Internuclear ophthalmoplegia may be seen rarely without multiple sclerosis in patients with certain types of cancer or with Chiari type II malformation.
Eye movement disorders and ophthalmoplegia can also be seen with progressive supranuclear palsy, thyroid disease, diabetes mellitus, brainstem tumors, migraine, basilar artery stroke, pituitary stroke, myasthenia gravis, muscular dystrophy, and the Fisher variant of Guillain-Barré syndrome. A tumor or aneurysm in the cavernous sinus, located behind the eyes, can cause painful ophthalmoplegia. Painful ophthalmoplegia can also be caused by an inflammatory process in the same area, called Tolosa-Hunt syndrome.

The patient's medical and family history and the examination findings will usually help differentiate the various syndromes associated with ophthalmoplegia. In addition, each syndrome is associated with characteristic features, such as nystagmus or ptosis. All patients with progressive external ophthalmoplegia should have a muscle biopsy to look for ragged red fibers or changes suggesting muscular dystrophy. A sample should be sent for analysis of mitochondrial DNA. Electromyogram (EMG), measurement of electrical activity in the muscle, helps diagnose myopathy.
Computed tomography scan (CT scan) or magnetic resonance imaging (MRI) scans of the brain may be needed to rule out brain tumor, stroke, aneurysm, or multiple sclerosis. When multiple sclerosis is suspected, evoked potential testing of nerve response may also be helpful. Analysis of cerebrospinal fluid may show changes characteristic of multiple sclerosis or Kearns-Sayre syndrome. Other tests that may be helpful in Kearns-Sayre include electrocardiogram (measuring electrical activity of the heart muscles), retinal examination, and a hearing test (audiogram). For possible myasthenia gravis, the Tensilon (edrophonium) test should be done. Tests should also be done to measure activity of the cell-surface receptors for acetylcholine, a chemical that helps pass electrical impulses along nerve cells in the muscles. Thyroid disease and diabetes mellitus should be excluded by appropriate blood work.

There are no specific cures for ocular myopathy or progressive external ophthalmoplegia. Vitamin E therapy has been used to treat Kearns-Sayre syndrome. Coenzyme Q (ubiquinone), a naturally occurring substance similar to vitamin K, is widely used to treat other forms of progressive external ophthalmoplegia, but the degree of success varies. Specific treatments are available for multiple sclerosis, myasthenia gravis, diabetes mellitus, and thyroid disease. Symptoms of ophthalmoplegia can be relieved by mechanical treatment. Surgical procedures can lift drooping eyelids or a patch over one eye can be used to relieve double vision. Because there is no blink response, a surgically lifted eyelid exposes the cornea of the eye so that it may become dry or be scratched. These complications must be avoided by using artificial tears and wearing eyepatches at night. In Kearns-Sayre syndrome, a pacemaker may be needed.

The prognosis of progressive external ophthalmoplegia depends on the associated neurological problems; in particular, whether there is severe limb weakness or cerebellar symptoms that may be mild or disabling. As with most chronic neurologic diseases, mortality increases with disability. Progressive external ophthalmoplegia itself is not a life-threatening condition. Kearns-Sayre syndrome is disabling, probably shortens the life span, and few if any patients have children. Overall life expectancy for multiple sclerosis patients is seven years less than normal; death rates are higher for women than for men.

There is no way to prevent ophthalmoplegia.

Cerebellar — Involving the cerebellum, which controls walking, balance, and coordination.
Cerebrospinal fluid — Fluid bathing the brain and spinal cord.
Heart block — A problem with electrical conduction in the heart muscle that may lead to irregular heart beat and require a pacemaker for treatment.
Mitochondria — Spherical or rod shaped parts of the cell. Mitochondria contain genetic material (DNA and RNA) and are responsible for converting food to energy.
Gale Encyclopedia of Medicine. Copyright 2008 The Gale Group, Inc. All rights reserved.

(of-thal'mō-plē'jē-ă)
Paralysis of one or more of the ocular muscles.
[ophthalmo- + G. plēgē, stroke]
Medical Dictionary for the Health Professions and Nursing © Farlex 2012 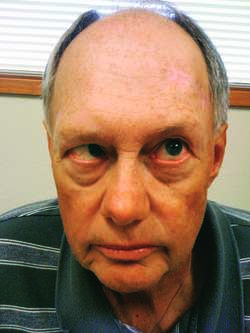 Paralysis of the iris and ciliary muscle.

Abbreviation: INO
Loss of the normal paired movements of the eyes when tracking an object to the left or right. An INO is marked by the failure of one eye, e.g., the left, to cross the midline during an attempt to see an object on the opposite side of the body, e.g., the right.

This failure of adduction of the affected eye is caused by a lesion of the medial longitudinal fasciculus of the brain.

Paralysis due to a lesion of the nuclei of the ocular motor nerves.

Incomplete paralysis involving only one or two of the ocular muscles.

Ocular muscle paralysis in which all the muscles become involved slowly due to deterioration of the motor nerve nuclei.

Paralysis of the muscles within the eye or of the external muscles that move the eye. The latter is sometimes referred to as external ophthalmoplegia.
Collins Dictionary of Medicine © Robert M. Youngson 2004, 2005

Paralysis of the ocular muscles. External ophthalmoplegia refers to paralysis of one or more extraocular muscles. If the levator palpebrae muscle is also involved, the condition is usually referred to as ocular myopathy. Internal ophthalmoplegia refers to a paralysis of the muscles of the iris and the ciliary muscle. Total ophthalmoplegia refers to a paralysis of all the muscles in the eye, which results in ptosis, immobility of the eye and pupil, and loss of accommodation. See Graves' disease; paralysis of the third nerve.
chronic progressive external ophthalmoplegia (CPEO) A rare disorder characterized by a progressive, bilateral ptosis and a loss of ocular motility. It is associated with mutation of mitochondrial DNA, which results in abnormalities in highly oxidative tissues such as the muscles and the brain. The initial sign is bilateral ptosis, followed later by strabismus. A related mitochondrial myopathy is the Kearns-Sayre syndrome in which there is CPEO, a type of retinitis pigmentosa characterized by coarse pigment clumping which principally affects the central retina, and cardiac conduction defects. This syndrome presents before age 20 years. See myasthenia gravis.
internuclear ophthalmoplegia (INO) An eye movement disorder resulting from a lesion in the medial longitudinal fasciculus, which disrupts the coordination between the oculomotor nucleus and the abducens nucleus. It is characterized by a limited adduction by the eye on the same side of the body as the lesion, and a jerky, horizontal nystagmus and overshoot by the other eye on abduction, when moving the eyes towards the side of the body opposite to that of the lesion. Convergence is usually intact, unless the lesion is widespread. Vertical gaze gives rise to nystagmus and oscillopsia. The condition is associated with multiple sclerosis, vascular disease, tumour of the brainstem or encephalitis. See ocular dysmetria; supranuclear gaze palsy; 'one and one half' syndrome.
Millodot: Dictionary of Optometry and Visual Science, 7th edition. © 2009 Butterworth-Heinemann

(of-thal'mō-plē'jē-ă)
Paralysis of one or more of the ocular muscles.
[ophthalmo- + G. plēgē, stroke]
Medical Dictionary for the Dental Professions © Farlex 2012