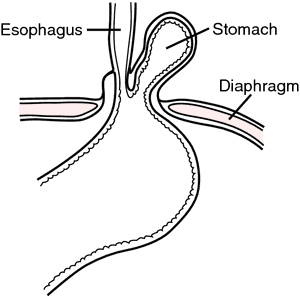 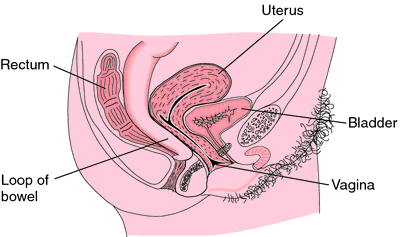 GI disease A herniation of the GE junction through the esophageal hiatus of the diaphragm into the thoracic cavity; HH affects up to 1% of the population, more common > age 50, 5% are symptomatic Risk factors Smoking, obesity. See Fundoplication, Nissen repair.
Hiatal hernia

Sliding hiatal hernia 90% of cases, characterized by axial and craniad displacement of esophagogastric–EG junction, which slides in and out of the chest depending on intrathoracic and intraabdominal pressures; the SHH is ensheathed in its own peritoneal sac Treatment Symptomatic cases are repaired by surgically returning the distal esophagus back to the peritoneal cavity with a valvoplasty
Para-esophageal hiatal hernia Less common and often accompanied by a sliding component; pure hiatal hernias are rare and associated with chronic hemorrhage and gastric volvulus, both indications for surgical repair
McGraw-Hill Concise Dictionary of Modern Medicine. © 2002 by The McGraw-Hill Companies, Inc.

, hiatus hernia (hī-ā'tăl hĕr'nē-ă, hī-ā'tŭs)
Protrusion of a part of the stomach through the esophageal hiatus of the diaphragm.
Medical Dictionary for the Health Professions and Nursing © Farlex 2012

A condition where part of the stomach extends through the diaphragm into the chest cavity.
Mentioned in: Antispasmodic Drugs, Bowel Training, Lower Esophageal Ring
Gale Encyclopedia of Medicine. Copyright 2008 The Gale Group, Inc. All rights reserved.

, hiatus hernia (hī-ā'tăl hĕr'nē-ă, hī-ā'tŭs)
Protrusion of a part of the stomach through the esophageal hiatus of the diaphragm.
Medical Dictionary for the Dental Professions © Farlex 2012

A. yazmine, if you want, you can try consume daily yogurt with a little apple cider vinegar in it (just add 5ml of ACV in your yogurt). some of gastric problems are believed to be caused by some bacteria. apple cider vinegar will help regulate the normal condition inside your gastric mucosa, so that for the long run it probably can help improve your condition.
More discussions about hiatal hernia
This content is provided by iMedix and is subject to iMedix Terms. The Questions and Answers are not endorsed or recommended and are made available by patients, not doctors.