[pap″ah-nik″o-la´oo]
a simple, painless test used most commonly to detect cancer of the uterus and cervix; it is based on the discovery by Dr. George N. Papanicolaou (1883–1962) that malignant uterine tumors slough off cancerous cells into surrounding vaginal fluid. Called also Pap test and Pap smear.

The Papanicolaou technique, an exfoliative cytological staining procedure, is used also in diagnosis of lung, stomach, and bladder cancers. It can be performed on any body excretion (urine, feces), secretion (sputum, prostatic fluid, vaginal fluid), or tissue scraping (as from the uterus, cervix, or stomach). The sample is removed from the area being examined, placed on a glass slide, stained, and then studied under a microscope for evidence of abnormal or cancerous cells.

In five minutes the Pap test can reveal uterine or cervical cancer at a stage in which it produces no visible symptoms, has done no damage, and usually can be completely cured. It is recommended that all women over age 18, and younger women who have been sexually active, should have an annual Pap test and pelvic examination. 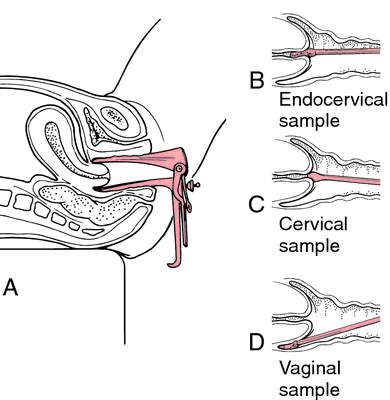 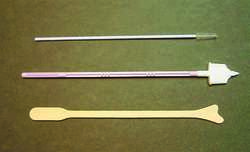 TOOLS FOR PAP TEST: (top to bottom) Cytobrush, cervical cytobroom, and wooden paddle
A cytological study used to detect cancer in cells that an organ has shed. The Pap test has been used most often in the diagnosis and prevention of cervical cancers, but it also is valuable in the detection of pleural or peritoneal malignancies and in the evaluation of cellular changes caused by radiation, infection, or atrophy. Synonym: Pap smear

Cellular material is collected and smeared on a glass slide. DNA hybrid testing for HPV can be done on the liquid-based specimen. When suspicious cells are identified, further testing may be performed on the same sample. Testing for human papilloma virus (HPV) is often performed if results show abnormal changes of uncertain significance. HPV is the primary risk factor for cervical cancer. Currently the two available technologies are Thin Prep Pap Test and Sure Path. See: illustration

Since the introduction of the Pap test, death from cervical cancer in the U.S. has declined by 70%. Although interpretation of the test is subject to human error, a variety of developments have improved test accuracy, including use of computer-generated procedures for detection and examination of abnormal cells and mandated reexamination of sample batches to test quality control. A woman may augment the accuracy and value of the Pap test by following these guidelines: Asking her health care provider about the quality of the laboratory evaluating the results; having an annual Pap test beginning by age 21 or when the woman becomes sexually active; scheduling the test during a time when she does not expect to be bleeding; abstaining from sexual intercourse and and putting nothing in her vagina; providing a detailed medical history, including use of birth control pills or other exogenous hormones and results of past Pap tests; and requesting a second opinion on the Pap test if she is at risk for cancer of the reproductive tract.

As with any test, it is possible that human errors may influence results. It is important that the quality of performance of the technicians and physicians be periodically reviewed by persons not employed by the laboratory or hospital.

The American Cancer Society (ACS) and the American College of Obstetricians and Gynecologists (ACOG) both recommend that screening for cervical cancer begin about 3 years after a woman begins having vaginal intercourse, but no later than age 21. Annual Pap testing should continue until age 30. After age 30, the ACS says women can reduce test frequency to every 2 to 3 years if their health care provider uses the newer liquid-based Pap tests, which include human papillomavirus (HPV) typing. In young, sexually active women, certain types of HPV cause precancerous changes that can lead to cervical cancer. Women who have had a hysterectomy for benign conditions and who do not have a cervix no longer need to undergo screening.

Screening can stop at age 65 or 70 for those women who have never had positive findings on previous examinations, as long as they have no new risk factors for cervical cancer.

Certain women are at high risk for cervical cancer and may need more frequent testing than the general population. These include women with HPV, chlamydial, or HIV infection and those who are immunosuppressed as a result of other illnesses. Additional risk factors for cervical cancer include early age at first intercourse, a history of sexually transmitted illnesses, cigarette smoking or substance abuse, a previous history of cervical dysplasia, a history of multiple sexual partners, or having a sexual partner who has other partners with cervical cancer.

Because Pap testing has been effective in detecting the early stages of cervical cancer, health care professionals should advocate this procedure for their female patients and participate in health promotion efforts to increase the number of women who have the test done regularly.

Feedback
Flashcards & Bookmarks ?
Please log in or register to use Flashcards and Bookmarks. You can also log in with
Flashcards ?
My bookmarks ?
+ Add current page to bookmarks
Mentioned in ?
References in periodicals archive ?
Our findings highlight individual (STI knowledge, sexual practices), social/structural (GNC stigma) and health care (past twoyear Papanicolaou test, having a regular source of health care, HCP knowledge and comfort with one's sexual orientation) factors associated with past two-year CBE among LGBQ women.
Correlates of clinical breast examination among lesbian, gay, bisexual, and queer women
Approximately 14.9% of married women reported having had a Papanicolaou test in the preceding 3 years in Jordan, compared with 86.0% of women aged [greater than or equal to] 18 years in the United States; 9.3% of women aged [greater than or euqual to] 40 years reported having had a mammogram in the preceding 2 years, compared with 74.9% of U.S.
Assessing risk factors for chronic disease--Jordan, 2004
Cytologic features of low-grade squamous intraepithelial lesion in ThinPrep Papanicolaou test slides and conventional smears: comparison of cases that performed poorly with those that performed well in the College of American Pathologists Interlaboratory Comparison Program in Cervicovaginal Cytology.
Low-Grade Squamous Intraepithelial Lesion or HighGrade Squamous Intraepithelial Lesion? Concordance Between the Interpretation of Low-Grade Squamous Intraepithelial Lesion and High-Grade Squamous Intraepithelial Lesion in Papanicolaou Tests: Results From the College of American Pathologists PAP Education Program
The survey provides prevalence estimates for the use of screening measures, such as blood cholesterol level, blood stool test, sigmoidoscopy, Papanicolaou test, mammography, and influenza and pneumococcal vaccinations.
Local Data for Local Decision Making -- Selected Counties, Connecticut, Massachusetts, and New York, 1997
Currently, 4 HPV testing platforms are approved by the FDA for triage of a Papanicolaou test diagnosis of atypical squamous cells of undetermined significance (reflex testing) and as an adjunct to the Papanicolaou test (cotesting) in women 30 years and older: HC2 was approved for these purposes in 2003, Cervista in 2009, and Aptima and cobas in 2011 (cobas was further approved for primary HPV screening of women 25 years and older in 2014).
Update on the College of American Pathologists Experience With High-Risk Human Papillomavirus Proficiency Testing for Cytology
Pap denotes Papanicolaou test; Suff, sufficient; Insuff, insufficient.
Are fluid-based cytologies superior to the conventional papanicolaou test? A systematic review. (Original Research)
In order to practice Papanicolaou test examination and comply with CLIA, cytopathologists and cytotechnologists are required to pass one national gynecologic cytology proficiency examination annually.
Misinterpretation Rates of High-Grade Squamous Intraepithelial Lesion in the College of American Pathologists Gynecologic PAP Education and PAP Proficiency Test Program
Specimen Adequacy for the Liquid-Based Cervical Cytology and Conventional Papanicolaou Test Groups, Total and Stratified by Visit Type
Efficacy of Liquid-Based Cervical Cytology Using Direct-to-Vial Sample Collection
The Papanicolaou test for cervical cancer detection: a triumph and a tragedy.
Hysterectomy prevalence and death rates for cervical cancer - United States, 1965-1988
Human papillomavirus typing and viral gene expression analysis for the triage of women with abnormal results from Papanicolaou test smears to colposcopy.
An Assessment of Gynecological Cytology Screening Practices Among Health Care Providers Nationwide
The greatest perceived need was for laboratory training related to the Papanicolaou test.
Laboratory services and training in support of the Year 2000 national health objectives