[smēr]
a specimen for microscopic study, the material being spread thinly and unevenly across the slide with a swab or loop, or with the edge of another slide. 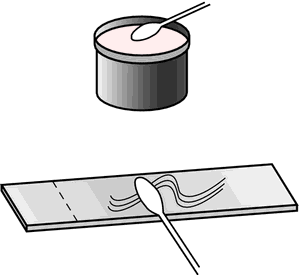 Smears from opaque thick liquids or semisolids, such as stool, can be made using a swab to sample and smear the material. From Mahon and Manuselis, 1995.
Pap smear (Papanicolaou smear) see papanicolaou test.

(păp)
n.
A test for cancer, especially of the female genital tract, in which a smear of exfoliated cells is specially stained and examined under a microscope for pathological changes. Also called Pap test.

Papanicolaou test, pap test Gynecology A test in which cells from the uterine cervix and endocervix are sampled, spread on a glass slide, stained, and interpreted by a cytotechnologist or pathologist based on the Bethesda System Abnormal values The PS is the 'gold standard' method for early detection of HPV, herpes, trichomonad infections, CIN/dysplasia, cervical CA Accuracy PS interpretation is a subjective art based on experience of the screening cytotechnologist or pathologist; in good labs, error rate–false negative is 5%–15%. See Bethesda System. Cf Papanicolaou classification.

A drop of (anticoagulated) whole blood spread thinly on a glass microscope slide so that blood cell types can be examined, counted, and characterized. Synonym: peripheral blood smear

Procedure: The slide must be grease-free. It is cleaned with alcohol, rinsed in warm water, and wiped clean with a lint-free towel or lens paper.A small drop of blood is placed on the slide; the end of another slide (spreader slide) is placed against the first slide at a 45° angle and pulled back against the drop of blood so that the drop spreads between the point of contact of the two slides. Then the spreader slide is pushed forward against the first slide; the blood will form an even, thin smear. The slide is dried by waving it in the air; it should not be heated. The blood smear is covered with Wright's stain and allowed to stand 2 min. An equal amount of distilled water or buffer solution is added and mixed uniformly. It is allowed to stand 5 min. The stain is gently washed off and the slide is allowed to dry.

A sample of cells taken from the mucosa lining the cheek for chromosomal or other studies.

A popular term for the cervical smear test. A method of screening women for the earliest signs of cancer of the neck (cervix) of the womb. A wooden or plastic spatula is used gently to scrape some surface cells off the inner lining of the cervix and these are then spread on a microscope slide, stained and examined by a pathologist skilled in CYTOLOGY. (George Nicholas Papanicolaou, 1884–1962, Greek-born American anatomist).

A screening test for precancerous and cancerous cells on the cervix. This simple test is done during a routine pelvic exam and involves scraping cells from the cervix.
Mentioned in: DES Exposure

Feedback
Flashcards & Bookmarks ?
Please log in or register to use Flashcards and Bookmarks. You can also log in with
Flashcards ?
My bookmarks ?
+ Add current page to bookmarks
TheFreeDictionary presents:
Write what you mean clearly and correctly.
Mentioned in ?
References in periodicals archive ?
Bethesda System has made a proposal that each Pap smear report should begin with an adequacy statement, which was one of the major advantages.
CERVICAL SMEARS--STUDY DONE IN A TERTIARY CARE HOSPITAL
We are not aware of any prior studies comparing training with the introduction of the cytobroom to improve Pap smear adequacy rates in SA.
A two-step quality-improvement intervention to address Pap smear quality at public health facilities in South Africa
[Prevalence of comm on sexually transmitted diseases among women referring for Pap smear in Sari, Iran].
Review of Trichomonas vaginalis in Iran, Based on Epidemiological Situation
reported that 50.5% of females have never heard about Pap smear and 37.5% of participants thought that they had no need to get smear test.36 A survey in tertiary care hospital of Karachi was conducted to determine the information and recognition about different features of cervix carcinoma.
Cervical cancer in Pakistan: A review
80% of women had received an AIDS diagnosis, and the vast majority was on antiretroviral therapy at the time of the first Pap smear after age of 65.
Women Living with HIV over Age of 65: Cervical Cancer Screening in a Unique and Growing Population
The proportion of ECA and SIL in patients with initial satisfactory anal Pap smears was also determined.
Histopathologic and Cytologic Follow-Up in High Risk Male Patients with Unsatisfactory Anal Cytology
Other strategies such as low-intensity cytology screening (e.g., 1 Pap smear every 10 years after age 35) and visual inspection need to be better evaluated in randomized controlled trials to determine their cost-effectiveness.9
Cervical cancer screening and HPV genotype distribution among asymptomatic patients of Karachi Pakistan
Factors affecting compliance with clinical practice guidelines for Pap smear screening among healthcare providers in Africa: Systematic review and meta-summary of 2045 individuals.
Papshop: not a 'melon'choly Pap smear workshop!
Results: The Pap smear result showed inf lammatory smear in 112 (24.88%) cases, 248 (55.11%) cases had a normal smear, 85 (18.88%) reported to be inadequate.
FREQUENCY OF SMEAR POSITIVE PRECANCEROUS CERVICAL LESIONS IN PATIENTS ATTENDING OUTPATIENT DEPARTMENT OF A TERTIARY CARE HOSPITAL
In the current study, 74% women knew Pap smear is a cervical screening tool; 82.5% were aware that Pap smear means Ca Cervix about to start and 61% knew the use of Pap to detect early precancerous lesions.
Knowledge, attitude & practices about cervical cancer and screening among nursing staff in a teaching hospital
Pap smear plays an important role in screening programs in reducing the incidence and mortality of CC (7) and routine cancer screening has become more frequent (8).
Conocimientos y actitudes como predictores en la pesquisa del cuello uterino en mujeres en un area urbana venezolana
A multipurpose version of a Pap smear can detect genetic signs of ovarian or uterine cancer in women, researchers report.
Updated test spots more cancers: gene-based Pap smear finds ovarian, uterine malignancies