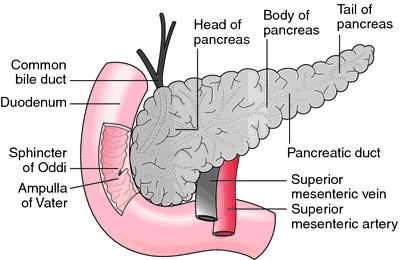 (pan'krē-as, pan-krē-ā'tă), [TA]
An elongated lobulated retroperitoneal gland, devoid of a distinct capsule, extending from the concavity of the duodenum to the spleen; it consists of a flattened head within the duodenal concavity, a neck connecting the head and body, an elongated three-sided body extending transversely across the abdomen, and a tail in contact with the spleen. The gland secretes from its exocrine part pancreatic juice that is discharged into the intestine, and from its endocrine part the internal secretions insulin and glucagon.
[G. pankreas, the sweetbread, fr. pas (pan), all, + kreas, flesh]
Farlex Partner Medical Dictionary © Farlex 2012

, pl. pancreata (pan'krē-ăs, -ā'tă) [TA]
An elongated lobulated retroperitoneal gland extending from the duodenum to the spleen; it consists of a flattened head (caput) within the duodenal concavity, an elongated three-sided body extending transversely across the abdomen, and a tail in contact with the spleen. The gland secretes from its exocrine part pancreatic juice that is discharged into the intestine, and from its endocrine part the internal secretions, insulin and glucagon.
[G. pankreas, the sweetbread, fr. pas (pan), all, + kreas, flesh]
Medical Dictionary for the Health Professions and Nursing © Farlex 2012 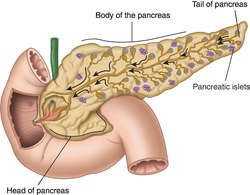 PANCREAS
A compound acinotubular gland located behind the stomach and in front of the first and second lumbar vertebrae. The head lies within the curve of the duodenum, the tail lies near the spleen, and the middle portion constitutes the body. The pancreas is both an exocrine and an endocrine organ. The exocrine glands are acini, each with its own duct; these ducts anastomose to form the main pancreatic duct or duct of Wirsung, which joins the common bile duct and empties into the duodenum at the hepatopancreatic ampulla. An accessory pancreatic duct or duct of Santorini is often present and opens into the duodenum directly. Scattered throughout the exocrine glandular tissue are masses of cells called islets of Langerhans, endocrine glands that secrete hormones. See: illustration

The exocrine secretion of the pancreas consists of enzymes that digest food in the small intestine, and sodium bicarbonate to neutralize hydrochloric acid from the stomach in the duodenum. See: pancreatic juice

Diseases of the Pancreas

Autoimmune damage to the islets of Langerhans results in type 1 diabetes mellitus, a disease in which insulin secretion is insufficient or completely absent. Insulin-secreting tumors of the pancreas, called insulinomas, produce hypoglycemia; they are exceptionally rare. Inflammation of the pancreas, known as pancreatitis, is a common condition that often results from excessive use of alcohol or from obstruction of the exocrine secretions of the pancreas by gallstones. Pancreas divisum is a common congenital anomaly in which the main duct of the exocrine pancreas drains into an accessory pancreatic papilla instead of the duodenal papilla; it has been associated with recurring episodes of pancreatitis. See: diabetes mellitus; insulin; pancreatic function test

A small mass of pancreatic tissue close to the pancreas but detached from it.

An anomalous condition in which a portion of the pancreas encircles the duodenum.

A congenital anomaly in which the dorsal and ventral pancreatic ducts fail to unite during embryonic development. It has been associated with pancreatitis.

A dorsal outpocketing of the embryonic gut that gives rise to the body and tail of the adult pancreas.

The semidetached lobular part of the posterior surface of a head of the pancreas, sometimes having a separate duct opening into the principal one.

An outgrowth at the angle of the hepatic diverticulum and the embryonic gut that migrates and fuses with the dorsal pancreas. It forms the head of the definitive organ.

A dual function gland situated immediately behind the STOMACH with its head lying within the loop of the DUODENUM, into which the duct of the pancreas runs. The pancreas secretes digestive enzymes capable of breaking down carbohydrates, proteins and fats into simpler, absorbable, compounds. It is also a gland of internal secretion (an endocrine gland). The endocrine element consists of the Islets of Langerhans, specialized cells that monitor blood and produce four hormones-INSULIN, GLUCAGON, SOMATOSTATIN and a pancreatic polypeptide of unknown function. See also DIABETES.
Collins Dictionary of Medicine © Robert M. Youngson 2004, 2005

a gland situated in the mesentary of the DUODENUM of jawed vertebrates that has both an exocrine and an endocrine function. The pancreatic duct carries digestive enzymes (see PANCREATIC JUICES from the gland into the duodenum, secretion being stimulated by

A five-inch-long gland that lies behind the stomach and next to the duodenum. The pancreas releases glucagon, insulin and some of the enzymes which aid digestion. Pancreatitis is the swelling of the pancreas which can nausea, jaundice, and severe pain and may be fatal.
Mentioned in: Adrenalectomy, Antiretroviral Drugs, Diabetes Mellitus, Diuretics, Hypotonic Duodenography, Insulin Resistance, Jaundice, Lipase Test, Pancreatectomy
Gale Encyclopedia of Medicine. Copyright 2008 The Gale Group, Inc. All rights reserved.

A. I’m sorry to say that 95% people that have pancreatic carcinoma do not survive. Apparently the area around it and the pancreas itself is without sensory nerves. That means that when it starts to be painful – it’s much too late…this is a silent killer.
Sorry for the bad news…

Q. DO YOU KNOW HOW TO STOP YOUR PANCREAS FROM SPASMS, I HAVE A HARD TIME WHEN IT SEEMS MY PANCREAS IS ACTING UP IT HURTS SO BAD AND MY LIPIDS ARE HIGH HOW DO I GET RID OF THE PAIN OR CONTROLL IT.

A. the Pancreas does not have sensory nerves in it. this is the reason why pancreas cancer is the most deadly- you don't realize it's there until it's much too late. so this pain you describe does not ad up to be from the Pancreas.
i think this is a very good reason to see a Doctor.

Q. hello friend i want to know how to over come deseases related to stomach and pancreas and what are the remedi

A. you'll have to be specific. there are dozens of different diseases that affects the stomach & pancreas. and as far as i know- none of them is connected to bi-polar disorder.
More discussions about Pancreas
This content is provided by iMedix and is subject to iMedix Terms. The Questions and Answers are not endorsed or recommended and are made available by patients, not doctors.