An atrial septal defect is an abnormal opening in the wall separating the left and right upper chambers (atria) of the heart.

Abnormal openings in the atrial septum occur during fetal development and are twice as common in females as in males. These abnormalities can go unnoticed if the opening is small, producing no abnormal symptoms. If the defect is big, large amounts of blood flowing from the left to the right atrium will cause the right atrium to swell to hold the extra blood.
People born with an atrial septal defect can have no symptoms through their twenties, but by age 40, most people with this condition have symptoms that can include shortness of breath, rapid abnormal beating of the atria (atrial fibrillation), and eventually heart failure.

Atrial septal defects can be identified by various methods. Abnormal changes in the sound of the heart beats can be heard when a doctor listens to the heart with a stethoscope. In addition, a chest x ray, an electrocardiogram (ECG, an electrical printout of the heartbeats), and an echocardiogram (a test that uses sound waves to form a detailed image of the heart) can also be used to identify this condition.
An atrial septal defect can also be diagnosed by using a test called cardiac catheterization. This test involves inserting a very thin tube (catheter) into the heart's chambers to measure the amount of oxygen present in the blood within the heart. If the heart has an opening between the atria, oxygen-rich blood from the left atrium enters the right atrium. Through cardiac catheterization, doctors can detect the higher-than-normal amount of oxygen in the heart's right atrium, right ventricle, and the large blood vessels that carry blood to the lungs, where the blood would normally subsequently get its oxygen.

Atrial septal defects often correct themselves without medical treatments by the age of two. If this dose not happen, surgery is done by sewing the hole closed, or by sewing a patch of Dacron material or a piece of the sac that surrounds the heart (the pericardium), over the opening.
Some patients can have the defect fixed by having an clam-shaped plug placed over the opening. This plug is a man-made device that is put in place through a catheter inserted into the heart.

Individuals with small defects can live a normal life, but larger defects require surgical correction. Less than 1% of people younger than 45 years of age die from corrective surgery. Five to ten percent of patients can die from the surgery if they are older than 40 and have other heart-related problems. When an atrial septal defect is corrected within the first 20 years of life, there is an excellent chance for the individual to live normally.

Cardiac catheterization — A test that involves having a tiny tube inserted into the heart through a blood vessel.
Dacron — A synthetic polyester fiber used to surgically repair damaged sections of heart muscle and blood vessel walls.
Echocardiogram — A test that uses sound waves to generate an image of the heart, its valves, and chambers.

[a´tre-al]
pertaining to an atrium.
atrial natriuretic factor (ANF) a hormone produced in the cardiac atrium; it inhibits renin secretion and thus the production of angiotensin, and stimulates aldosterone release. Its effect is increased excretion of water and sodium and a lowering of blood pressure, which reduces the workload of the heart.
atrial septal defect a congenital heart defect in which the ostium primum or ostium secundum, openings in the septum primum of the embryonic heart, fail to close completely after birth. When an opening remains between the atria, some of the oxygen-rich blood from the left atrium passes into the right atrium and travels back to the lungs without being first transported through the body. 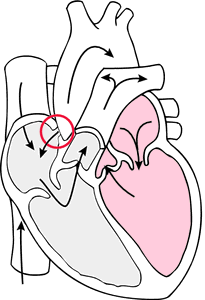 Atrial septal defect. The shunt is from left atrium to right atrium. From Betz et al., 1994.

[MIM*108800]
a congenital defect in the septum between the atria of the heart, caused by failure of the foramen primum or secundum to close normally; may involve endocardial cushions of the atrioventricular canal; occasionally there is strong evidence of autosomal dominant inheritance [MIM*108800]. In varying degree, it is also a common feature of the autosomal recessive Ellis-van Creveld syndrome [MIM*225500] and the autosomal dominant Holt-Oram syndrome [MIM*142900].

n.
A defect in the septum between the right and left atria of the heart, resulting from the failure of a foramen to close normally.

An acyanotic congenital heart disease (CHD), which is common (1/3 of congenital heart defects) in adults and 2- to 3-fold more common in females, caused by nonclosure of the foramen ovale at birth, resulting in a defect between the atria. ASDs are usually asymptomatic until the 3rd or 4th decades of life.

Severity
< 0.5 in diameter, no consequences; > 2.0 cm, substantial haemodynamic consequences. Because the right ventricle (RV) is more compliant blood shunts from the left to the right atrium, causing increased pulmonary blood flow and dilation of both atria, RV and pulmonary arteries; as the RV fails or loses compliance, L→R shunt decreases and R→L shunting may occur; with a large ASD, an RV or pulmonary arterial impulse may be palpable.

Heart sounds
Normal 1st heart sound (HS), wide fixed splitting 2nd HS; a systolic ejection murmur, heard in the 2nd intercostal space (IC), peaking in midsystole and ending before the 2nd HS, is usually so soft that it is mistaken for an innocent murmur.

(ASD) (ā'trē-ăl sep'tăl dē'fekt)
A congenital defect in the interatrial septum between the atria of the heart, due to failure of the foramen primum or foramen secundum to close normally.

A hole in the wall between the upper two chambers of the heart.

A. I am very much moved by your deeds.

• Many people with autism do flourish and go on to hold responsible jobs and live independently. Others have the intellectual abilities to be employed but are held back by their inability to adapt socially to the stresses of everyday life.

• The focus of every intervention program for the person with autism should be to work on helping them adapt to living in society. Their quality of life and ability to function is far more important than how they do on an I.Q. test.
More discussions about atrial septal defect