(bī′păs′)
n.
Medicine
a. An alternative passage created surgically to divert the flow of blood or other bodily fluid or circumvent an obstructed or diseased organ.
b. A surgical procedure to create such a channel: a coronary artery bypass; a gastric bypass.
tr.v. by·passed, by·passing, by·passes
To avoid (an obstacle) by using an alternative channel, passage, or route.
The American Heritage® Medical Dictionary Copyright © 2007, 2004 by Houghton Mifflin Company. Published by Houghton Mifflin Company. All rights reserved.

Cardiovascular surgery
A surgical procedure in which the surgeon creates a new pathway for the flow of body fluids; bypass graft.

Managed care
The re-routing of a patient in (emergency) transit who was to have been admitted to facility A (e.g., to A&E, paediatric ICU or other) to an equivalent facility B, when A is filled to capacity.

Vox populi
A by-passage—e.g., for a pipe or other channel—that diverts a fluid or gas from its usual route.
Segen's Medical Dictionary. © 2012 Farlex, Inc. All rights reserved.

Cardiovascular surgery A surgical procedure in which a cardiovascular surgeon creates a new pathway for the flow of body fluids; bypass graft. See Cardiopulmonary bypass, Coronary artery bypass graft Managed care The re-routing of a Pt to be admitted to facility A–eg, to an ER, pediatric ICU, or other, to an equivalent facility B, when A is filled to capacity. Cf Anti-dumping laws, Bed, Dumping.
McGraw-Hill Concise Dictionary of Modern Medicine. © 2002 by The McGraw-Hill Companies, Inc.

(bī'pas)
1. A shunt or auxiliary flow.
2. To create new flow from one structure to another through a diversionary channel.
See also: shunt
Medical Dictionary for the Health Professions and Nursing © Farlex 2012 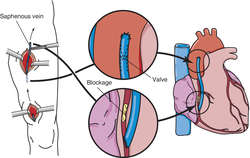 A. Bariatric surgeries or – gastric bypass surgeries for weight loss fall into three categories: Restrictive procedures make the stomach smaller to limit the amount of food intake, malabsorptive techniques reduce the amount of intestine that comes in contact with food so that the body absorbs fewer calories, and combination operations employ both restriction and malabsorption. The exact one to be done should be decided with the physician according to each patients abilities and pre-operative function level.

Q. how about gastric bypass surgery how does it work on a person and what they half to eat how much weight does the person lose

A. surgery should always be the last answer because it is the biggest change you will do to your body and to your life. theres always a chance that something might go wrong. you have to be on a tight diet meaning one bite of what you eat and that means no sugars, fats, or oils. even if you thought there was no sugar, oil or fat in what ever you eat you will have so much pain in your stomach and you wont stop vomiting which will make it even more painful. the bright side to it is you will lose about 50 pounds in one month which is great but if you dont work out like crazy trying to tone up your muscles you will sag all over and then theres more money thrown out of your pocket doing tummy tucks and tucks for everything else. itall depends on the person. good luck in what ever you do. do your research first

A. I had Gastric Bypass Surgery 5 years ago.. The surgery affects people differently.. I do believe the surgery has been perfected over the years and there isn't as great a risk of complications as there used to be. When I had my surgery the risk of death was 1 in 200. That was 5 years ago. I can say this much. It's changed my life!!. I'm MUCH healthier. The only side affect I have is I have to watch the amount of sweets I eat. My blood sugar drops and I faint. But, that's a good thing.. makes me not want to eat any sweets! A friend of mine can't eat protein. So she has to look for other sources. Like I said.. it affects everyone different.
More discussions about bypass
This content is provided by iMedix and is subject to iMedix Terms. The Questions and Answers are not endorsed or recommended and are made available by patients, not doctors.