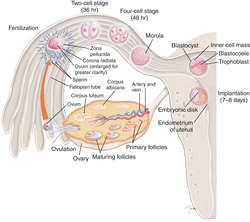 An ovum in which the yolk is fairly abundant and tends to concentrate in one hemisphere.