Norplant is a long-acting hormone that is inserted under the skin and prevents conception for up to five years. Depo-Provera is also a hormone, but is administered by intramuscular injection and provides protection against pregnancy for three months. Lunelle is another injectable contraceptive that is administered monthly (every 28 to 30 days); it was approved by the Food and Drug Administration (FDA) in October 2000. The hormone in Norplant and Depo-Provera is progestin, a synthetic hormone similar to one found naturally in a woman's body; Lunelle contains the hormones progestin and estrogen.

The purpose of these hormones is to prevent pregnancy; they are about 99% effective in achieving this goal. No hormonal contraceptive methods provide protection from AIDS or other sexually transmitted diseases.
Depo-Provera and Lunelle are given as an injection and work in several ways to prevent conception. First, the egg (ovum) is prevented from maturing and being released. The mucus in the cervix (opening into the uterus or womb) becomes thicker, making it difficult for the sperm to enter. Depo-Provera and Lunelle also cause the lining of the uterus to become thinner, making implantation of a fertilized egg unlikely.
An injection of Depo-Provera or Lunelle must be given within the first five days of a normal period. Depo-Provera provides protection against pregnancy for three months, while Lunelle provides similar protection for one month. Ovulation (release of a mature egg) typically occurs within 60 days of the last injection of Lunelle, about twice as fast after use of Depo-Provera. Also, because Lunelle is a combined hormone contraceptive as opposed to progestin-only Depo-Provera and Norplant, it is less likely to cause irregular or absent menstruation.
Norplant capsules contain a synthetic hormone that is slowly released over a period of up to five years. It functions like Depo-Provera in that it prevents the ovaries from producing ova (eggs) and also results in thicker mucus in the cervix, which prevents the sperm from passing through the cervix. Norplant can be inserted at any time.

The woman being considered for Depo-Provera or Lunelle will have a pelvic and breast examination, a Pap test (a microscopic examination of cell samples taken from the cervix), blood pressure check, weight check, and a review of her medical history. Women who have diabetes mellitus, major depression, blood clotting problems, liver disease, or weight problems should use these methods only under strict medical supervision. Depo-Provera or Lunelle should not be used if the woman is pregnant, has unexplained vaginal bleeding, suffers from severe liver disease, has breast cancer, or has a history of blood clots or stroke.
Individuals who select Norplant will receive the same basic physical examination. If approved for this method, a site of implantation will be selected (usually the inside of the upper arm), and the area prepared for minor surgery. The skin will be washed with soap and water, and an antiseptic, such as iodine solution, will be applied. The physician will use a local anesthetic to numb the area, a small incision will be made, the six Norplant capsules will be inserted, and the incision sewn up (sutured). Protection against pregnancy normally begins within 24 hours. If necessary, the implants can be removed in 15-20 minutes. Norplant should not be used by women who are pregnant, have blood clotting problems, or have unexplained vaginal bleeding. Advantages include light periods with less cramping and decreased anemia. This form of birth control may also be protective against endometrial cancer.
Because Depo-Provera and Norplant use only the hormone progestin, they may provide an alternative for women who can not use estrogen-containing birth control pills. One benefit of Lunelle, however, is that its effects wear off more quickly than Depo-Provera, an important factor in the event that a woman has serious side effects or wants to become pregnant.

Hormone — A chemical produced in a gland or organ and transported by the blood to another area of the body where it produces a specific effect.
Pap test — A microscopic examination of cell samples taken from the cervix.

The most common side effects associated with Depo-Provera and Lunelle are yellowing of the skin, headache, nervousness, dizziness, abdominal pain, hair loss, rash, increase in the number of migraine headaches, increased or decreased interest in sexual intercourse, the development of dark spots on the skin, depression, and weakness. Danger signs that need to reported immediately include weight gain, heavy vaginal bleeding, frequent urination, blurred vision, fainting, severe abdominal pain, and coughing up blood. Because the effects of Depo-Provera may last up to 12 weeks, it may take a longer time for women trying to conceive to become pregnant after discontinuing the injections.
The main reactions to Norplant include headache, weight gain, irregular periods or no period at all, breast tenderness, acne, gain or loss of facial hair, color changes of the skin over the area of insertion, and ovarian cysts. The doctor should be notified immediately of lumps in the breast, heavy vaginal bleeding, yellowing of the skin or eyes, or infection of the incision. Women who use Norplant are discouraged from smoking.

These hormone contraceptive methods normally result in a success rate of 99%.

[nor´plant]
trademark for a preparation of the contraceptivelevonorgestrel in the form of an implant that can be inserted beneath a woman's skin. 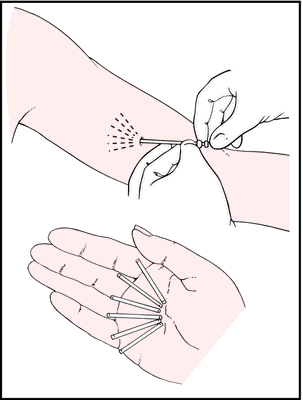 Insertion of Norplant capsules beneath the skin. From Nichols and Zwelling, 1997.
Miller-Keane Encyclopedia and Dictionary of Medicine, Nursing, and Allied Health, Seventh Edition. © 2003 by Saunders, an imprint of Elsevier, Inc. All rights reserved.

An implantable contraceptive system that prevents pregnancy by inhibiting ovulation and thickening the cervical mucus.

A brand name for a now-withdrawn implantable long-term, reversible contraceptive containing LEVONORGESTREL. Some women may have Norplant in situ until the year 2005. Special precautions are necessary for their removal.
Collins Dictionary of Medicine © Robert M. Youngson 2004, 2005

Feedback
Flashcards & Bookmarks ?
Please log in or register to use Flashcards and Bookmarks. You can also log in with
Flashcards ?
My bookmarks ?
+ Add current page to bookmarks
Mentioned in ?
References in periodicals archive ?
children to be implanted with Norplant in order to qualify for or
Neurocops: the politics of prohibition and the future of enforcing social policy from inside the body
We decided we would like to start a family, so I had the Norplant removed.
After 15 years, I've not given up hope of having the baby I long for; As a teenager, Rachel suffered six-week-long periods, acne and weight gain - but it took until she was 30 to diagnose her problem, reports JILL PALMER
Walker, "Judicial Control of Reproductive Freedom: The Use of Norplant as a Condition of Probation," Iowa Law Review 78 (1993): 779-812.
Procreation and punishment. (at law)
"Inplanon was developed as a better alternative to Norplant, a similar contraceptive device which consisted of six rods which were implanted.
Improved contraceptive implant gaining favour
While almost all traditional indemnity insurance plans provide coverage for some prescription drugs, only about half cover any of the five contraceptive methods available by prescription--oral contraceptive pills, the intrauterine device, Depo Provera, Norplant and the diaphragm--all of them prescribed to women.
Contraceptives Controversy
So even if you're using another kind of birth control--like the Pill, IUD, cervical cap, Norplant, Depo-Provera, or diaphragm --the man must still use a condom if you want protection against HIV.
How to Protect Yourself From AIDS
using various methods of contraception was as follows: Female sterilization (25.6%), contraceptive pill (24.9%), male condom (18.9%), male sterilization (10.1%), withdrawal (2.9%), injectable (Depo-Provera) (2.7%), periodic abstinence (2.2%), diaphragm (1.7%), implant (Norplant) (1.3%), spermicides (1.3%), and IUD (0.7%).
Morbidity and Mortality Weekly Report, 48, 1073-1080
Then he describes drugs and devices which are primarily abortifacient: eleven anti-progesterones, progestins (such as Depo-Provera and Norplant), and vaccines; four prostaglandins; and four intrauterine devices (IUDS).
Infant homicide through contraception
According to the Center for Reproductive Law & Policy (CRLP), 49% of large group health plans do not routinely cover any contraceptive method, and as few as 15% cover all five of the most common reversible methods: oral contraceptives, diaphragms, Depo Provera, IUDs, and Norplant. The Alan Guttmacher Institute estimates that the maximum cost of covering those five methods would be $21.40 annually per employee.
Contraceptive legislation fuels abortion, conscience debates
Norplant, which works by inserting six hormone-charged rods under the skin, will be discontinued by October - six years after its UK launch.
Contraceptive implant to be withdrawn