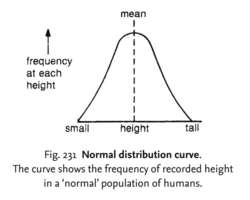 the bell-like shape produced when a ‘normal’ population is sampled for a continuously varying character (e.g. height in humans) and the FREQUENCY DISTRIBUTION plotted on a graph. The curve is theoretically exactly symmetrical, so that the shape on each side of the mean is the mirror image of the other, with an equal area. See Fig. 231 . Thus the MODE, MEDIAN, and ARITHMETIC MEAN are all at the centre of the distribution. The curve shows the frequency of recorded height in a ‘normal’ population of humans.
Collins Dictionary of Biology, 3rd ed. © W. G. Hale, V. A. Saunders, J. P. Margham 2005