[noor″o-der″mah-ti´tis]
an extremely variable eczematous dermatosis presumed to be a cutaneous response to prolonged vigorous scratching, rubbing, or pinching to relieve intense pruritus. It is believed by some authorities to be a psychogenic disorder. The term is also used to refer to lichen simplex chronicus(circumscribed neurodermatitis) and sometimes to atopic dermatitis(disseminated neurodermatitis).

(1) Atopic dermatitis, see there.
(2) Cutaneous neurosis—lichenification of skin due to constant rubbing and scratching. 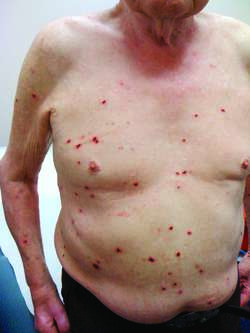 NEURODERMATITIS : excoriations on chest and arms
Inflammation and itching of the skin, associated with, but not entirely due to, emotional stress. After an initial irritant, scratching becomes habitual and prolongs the condition. Treatment is corticosteroid ointment or cream. See: illustration

Chronic superficial inflammation of the skin characterized by thickening, excoriation, and lichenification, usually beginning in infancy. It is common in families with a high incidence of allergic diseases.
Synonym: atopic dermatitis