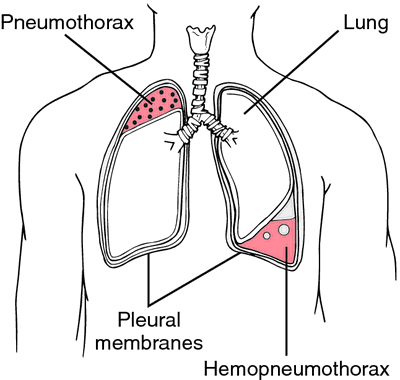 Pneumothorax. Air within the pleural cavity has entered some of the space normally occupied by the lung, thus preventing its expansion and causing partial collapse.
Miller-Keane Encyclopedia and Dictionary of Medicine, Nursing, and Allied Health, Seventh Edition. © 2003 by Saunders, an imprint of Elsevier, Inc. All rights reserved.

(no͞o′mō-thôr′ăks′, nyo͞o′-)
n.
Accumulation of air or gas in the pleural cavity, occurring as a result of disease or injury, or sometimes induced to collapse the lung in the treatment of tuberculosis and other lung diseases.
The American Heritage® Medical Dictionary Copyright © 2007, 2004 by Houghton Mifflin Company. Published by Houghton Mifflin Company. All rights reserved.

(nū'mō-thōr'aks)
The presence of air or gas in the pleural cavity.
[G. pneuma, air, + thorax]
Medical Dictionary for the Health Professions and Nursing © Farlex 2012 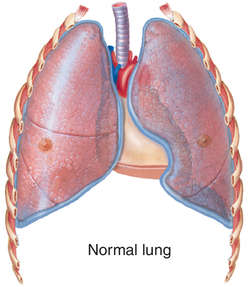 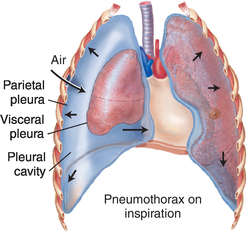 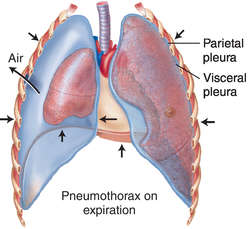 The presence of air in the normally potential space between the two layers of the PLEURA (the pleural cavity). This may occur spontaneously from the rupture of a CONGENITAL bleb on the inner layer, or may result from air access from the outside through a wound. Pneumothorax causes the collapse of the lung on the same side. In minor cases there is recovery without treatment, but the air may have to be withdrawn through a tube.
Collins Dictionary of Medicine © Robert M. Youngson 2004, 2005