[ne-ka´tor]
a genus of hookworms. N. america´nus is the New World or American hookworm, a species widely distributed in the southern United States, the Caribbean, and Central and South America.
Miller-Keane Encyclopedia and Dictionary of Medicine, Nursing, and Allied Health, Seventh Edition. © 2003 by Saunders, an imprint of Elsevier, Inc. All rights reserved.

(nē-kā'tŏr),
A genus of nematode hookworms (family Ancylostomatidae, subfamily Necatorinae) distinguished by two chitinous cutting plates in the buccal cavity and fused male copulatory spicules. Species include Necator americanus, the so-called New World hookworm (although it is also prevalent in the tropics of Africa, southern Asia, and Polynesia); the adults of this species attach to villi in the small intestine and suck blood, causing abdominal discomfort, diarrhea (usually with melena) and cramps, anorexia, loss of weight, and hypochromic microcytic anemia, which may occur in advanced disease.
See also: Ancylostoma.
[L. a murderer]
Farlex Partner Medical Dictionary © Farlex 2012

(nĕ-kā'tŏr)
A genus of nematode hookworms with species that include N. americanus, the New World hookworm; the adults of this species attach to villi in the small intestine and suck blood, causing abdominal discomfort, diarrhea and cramps, anorexia, weight loss, and hypochromic microcytic anemia.
See also: Ancylostoma
[L. a murderer]
Medical Dictionary for the Health Professions and Nursing © Farlex 2012

(ne-ka'tor) [L., murderer]
A genus of parasitic hookworms belonging to the family Ancylostomidae. 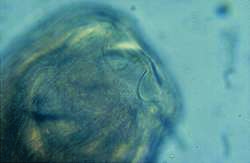 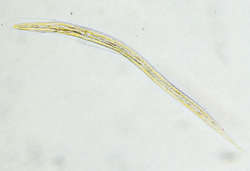 A genus of hookworms that parasitize the small intestine. The commonest species to affect humans is Necator americanus . Infection with this worm is common in Africa, Central and South America and the Pacific.
Collins Dictionary of Medicine © Robert M. Youngson 2004, 2005

Feedback
Flashcards & Bookmarks ?
Please log in or register to use Flashcards and Bookmarks. You can also log in with
Flashcards ?
My bookmarks ?
+ Add current page to bookmarks
Mentioned in ?
References in classic literature ?
But she dropped the information, "Necator," from her lips just loud enough to be heard by Razumov.
Nikita, surnamed Necator, with a sinister aptness of alliteration!
He was said to have been innumerable times in and out of Russia, the Necator of bureaucrats, of provincial governors, of obscure informers.
View in context
Hookworm infection often caused by Necator americanus and Ancylostoma duodenale is believed to be an important cause of chronic intestinal blood loss and anaemia in the tropics (10).
Isospora belli, Strongyloides stercoralis & hookworm multiple-infection in a person with HIV infection & normal CD4+ T-lymphocyte count
Nematoda is a diverse animal phylum containing more commonly known parasites such as hookworms (Necator americanus and Ancylostoma duodenale in people, An.
Chapter 6 Parasitic zoonoses
Powdery mildew is one of the important disease caused by (Uncinula Necator) in grape (Vitis vinefera L.).
Studies on biochemical variability for disease resistance in grape germplasm against powdery mildew (Uncinula Necator)
Ashford, with only basic laboratory equipment and techniques acquired at the AMS, demonstrated that Puerto Rican anemia was due to the hookworm, Necator americanus.
The evolution of public health education in the US army, 1893-1966
He has his sights set on thwarting Botrytis cinerea, which causes gray-mold disease, and Uncinula necator, the fungus that causes powdery mildew, through a better understanding of how plant development affects disease susceptibility.
In New York's finger lakes region: a focus on grape genetics
Scientists from the University of Nottingham studying in Ethiopia noted that people infected with hookworms - Latin name necator americanus - had their immune systems damaged.
WORMS CURE FOR HAYFEVER; Live beasties to kill off allergies
These little creatures, Necator americanus, will work their way through the skin, all the way to the heart's right side and from there, to the lungs.
What dangers lurk within the soil
THE indistinguishable eggs of the hookworms Ancylostoma duodenale and Necator americanus are found in the faeces of 1.3 billion people wordwide.
That's a new weird record; FROM THE LONGEST NASAL HAIR TO THE LOUDEST BURP.