[mi″ko-bak-tēr´e-um]
a genus of gram-positive, aerobic, acid-fast bacteria, occurring as slightly curved or straight rods. It contains many species, including the highly pathogenic organisms that cause tuberculosis (M. tuberculo´sis) and leprosy (M. lep´rae). M. a´vium causes tuberculosis in birds and pigs and pulmonary disease in humans. M. bo´vis is the bovine tubercle bacillus and can cause tuberculosis in humans who drink infected milk (strict testing of cattle makes this uncommon in developed countries); an attenuated strain is used to prepare BCG vaccine. M. chelo´nae is an opportunistic pathogen that causes synovial lesions, gluteal abscesses, and gross lesions in various organs. M. fortu´itum causes lesions of the lung, bone, or soft tissue following trauma. M. haemo´philum causes skin lesions. M. ho´minis is a common inhabitant of the vagina and cervix and causes infections of the male and female reproductive tracts, as well as respiratory disease and pharyngitis. M. intracellula´re occasionally causes chronic pulmonary disease in adults and lymph node infection in children. M. kansa´sii causes a tuberculosis-like disease. M. mari´num (also known as M. bal´nei) is the agent of swimming pool granuloma.

[mi″ko-bak-tē″re-um] (L.)
1. an individual organism of the genus Mycobacterium.
2. a slender, acid-fast microorganism resembling the bacillus that causes tuberculosis.
nontuberculous mycobacteria mycobacteria other than M. tuberculosis or M. bovis, consisting of nonpathogens and pathogens causing opportunistic infections in immunocompromised patients and infections in otherwise normal individuals.

A genus of obligate aerobic bacteria, family Mycobacteriaceae, order Actinomycetales. All myobacteria are capable of producing the typical chronic inflammation, Langhans’ giant cells and caseating necrosis, and are indistinguishable by acid-fast staining (due to the high lipid concentration in the outer cell wall). Skin is the usual portal of entry for non-tuberculous mycobacteria.

(mī'kō-bak-tēr'ē-ŭm)
A genus of aerobic, nonmotile bacteria (family Mycobacteriaceae) containing gram-positive, acid-fast, slender, straight or slightly curved rods; slender filaments occasionally occur, but branched forms rarely are produced. Parasitic and saprophytic species occur. Some species are associated with infections in immunocompromised people, especially those with AIDS. The type species is M. tuberculosis. It is the type genus of the family Mycobacteriaceae.
[myco- + bacterium]

(mi?ko-bak-tir'e-um) [ myco- + bacterium]
A genus of acid-fast, nonmotile, non–spore-forming bacilli of the family Mycobacteriaceae, which includes the causative agents of tuberculosis and leprosy. The organisms are slender, nonmotile, gram-positive rods and do not produce spores or capsules.

The causative species of tuberculosis in cows and, less commonly, in humans.

A causative species of tuberculosis-like pulmonary disease in humans.

The causative species of leprosy.

An atypical mycobacterium that thrives in water and produces skin infection resembling sporotrichosis. It is the cause of swimming pool granuloma.

Abbreviation: NTM
Any mycobacterium that does not cause tuberculosis. There are four main classes. Three of these groups grow more slowly than M. tuberculosis and one group grows more rapidly. These organisms may cause various skin, lung, or other conditions or they may be harmless.

An emerging but still uncommon acid-fast bacillus that grows slowly. It differs from M. avium in having distinct mycolic acids and ribosomal RNA. 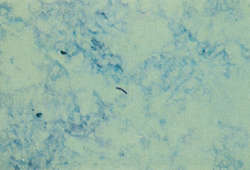 A causative agent of infections of the skin and the underlying soft tissues. It is a common cause of illness in tropical and subtropical Africa and South America, where it is responsible for Buruli ulcer. It is thought to be the third most common disease-causing mycobacterium (after M. tuberculosis and M. leprae) in humans.

A genus of ACID FAST bacteria that contains a number of species causing TUBERCULOSIS in humans and other animals and HANSEN'S DISEASE in humans. Species of medical importance include Mycobacterium tuberculosis , Mycobacterium leprae and Mycobacterium ulcerans .

(mī'kō-bak-tēr'ē-ŭm)
A genus of aerobic, nonmotile bacteria. Some species are associated with infections in immunocompromised people, especially those with AIDS. The type species is M. tuberculosis.
[myco- + bacterium]

Feedback
Flashcards & Bookmarks ?
Please log in or register to use Flashcards and Bookmarks. You can also log in with
Flashcards ?
My bookmarks ?
+ Add current page to bookmarks
TheFreeDictionary presents:
Write what you mean clearly and correctly.
Mentioned in ?
References in periodicals archive ?
The occurrence of Mycobacterium infection in fishes is widespread, and cases of M.
Multiple species were sampled because both Mountain Whitefish (Abernethy and Lund 1978; Arakawa and Fryer 1984) and Rainbow Trout (Wood and Ordahl 1958; Arakawa and Fryer 1984) are known to be susceptible to Mycobacterium infection and cohabitate.
The acid-fast positive samples were sent to Washington Animal Disease Diagnostic Lab (WADDL) at Washington State University (Pullman, Washington) for confirmation of Mycobacterium infection.
Identification of Mycobacterium kansasii and a Mycobacterium sp. in salmonids from the Missouri River, Montana
The search strategy was as follows: "mycobacteria, atypical" [MeSH] AND "Asia" [MeSH] OR "atypical mycobacterium infections" [MeSH] AND "Asia" [MeSH].
Nontuberculous mycobacteria in respiratory tract infections, Eastern Asia