A system of classification of colours composed of about 1000 colour samples, each designated by a letter and number system. The letter and number of each sample indicate its hue, saturation (called chroma in this system) and brightness (called value). They are represented by a three-dimensional polar coordinate system in which the hue is represented along the circumference, the value along the vertical axis and the chroma along a radius (Fig. M14). See colorimetry; Farnsworth test. 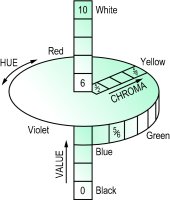