(fēld),
A definite area of plane surface, considered in relation to some specific object.
[A.S. feld]

A locus on a data collection tool—usually a case report form—for recording or displaying a data element.

(fēld)
A definite area of plane surface, considered in relation to some specific object.

(feld)
1. An open expanse of land.
2. A discipline or an area of study.
3. A region of space in which a given force operates or a given condition exists.
4. A place of natural conditions, as opposed to a controlled environment, such as a laboratory or a hospital.

The spatial region in which a given person can hear sounds.

A colloquial term for a bloodless surgical field in which the surgeon's vision is not obscured.

The region in space in which the attractive or repulsive effects of a given electric charge have an effect.

Abbreviation: EMF
The region in space in which the photons produced by moving electric charges have an effect. EMFs can be produced by power lines, radio waves, and microwaves. The energy produced in an EMF increases as the frequency of the photons increases, and EMFs produced by very high frequency photons (e.g., xrays and gamma rays) are sufficiently energetic to induce cancer.

Any region of the cortex concerned with sensation from or movement of an eye.

The widest limits of vision in all directions within which the eyes can fixate.

One the layers of axons -- many originating in the globus pallidus -- that form the lower (inferior) border of the thalamus in the brain. Together, the axons and neighboring neuronss are called the subthalamic reticular nucleus.
Synonym: Forel's field, prerubral field

A space in which there are no surfaces that reflect specific frequencies of sound.

An electric field that may surround an object placed in a rapidly changing magnetic environment, such as one generated by a magnetic resonance imaging device.

The region in space in which the attractive effects of a given mass have an effect.

Any region of the cortex concerned with sensation from or movement of a hand.

The region of the embryo destined to produce the heart.

The portion of an object seen when the high-magnification lenses of a microscope are used.

Any of the three contiguous, but histologically distinguishable, sheets of cells that form the cortex of the hippocampus; the fields are usually called CA1, CA2, and CA3.

The portion of an object seen when the low-magnification lenses of a microscope are used.

The region in the body containing a lung. Often, 'lung field' refers to the section of a medical image (e.g., chest xray) that shows a lung.

The space permeated by the magnetic lines of force surrounding a permanent magnet or coil of wire carrying electric current.

Abbreviation: PEMF
An alternating electrical current used to produce an electromagnetic field. This may induce healing when applied to a fractured bone. The field is applied noninvasively to the affected limb. It may be moderately helpful in treating bony nonunion. See: diathermy

A description of the effective stimuli of a given neuron. For sensory receptor neurons, the receptive field is the type of effective stimulation (e.g., light, sound, mechanical pressure) and the range of sensitive locations (e.g., center of visual field, left auditory field, tip of right thumb).

A body surface, along with surrounding drapes or towels, within which an operation may safely take place without introducing potentially hazardous microorganisms into a patient.

The field is prepared by meticulously washing and scrubbing the patient on whom an operation will be performed with disinfectant solution. Sterile drapes and towels are placed over the patient to cover any unprepared skin or clothing with sterilized fabric. All surgical instruments that enter the operative theatre are cleansed according to decontamination and sterilization practices. Finally, all surgical personnel scrub for prescribed time periods with disinfectants before entering the operating room. They must wear sterile gloves, gowns, masks and shoe covers and replace these if any of them contact nonprepared items during surgery.

The area in which an operation is performed. This field is prepared and covered to maintain sterility during operations.

Abbreviation: UFOV
A test of visual attention that measures the space in which an individual can receive information rapidly from two separate sources. It is a strong predictor of accidents in older drivers. Training can expand the useful field of view and increase the visual processing speed of an elderly person.

The area within which objects may be seen when the eye is fixed.
Synonym: field of vision See: illustration; perimetry

A limited area.
binocular visual field An approximately circular zone of radius about 60º centred on the point of fixation (slightly larger in the lower part of the field) in which an object stimulates both retinas simultaneously. Beyond that area on each side, the visual field is monocular. See visual field.
field of excursion See field of fixation.
field of fixation The area in space over which an eye can fixate when the head remains stationary. The field of fixation is smaller than the field of vision. It extends to approximately 47º temporally, 45º nasally, 43º upward and 50º downward. Syn. field of excursion; motor field. See apparent field of view; real field of view; visual field.
field glasses See binoculars.
keyhole visual field A term used to describe a visual field defect in which there is a bilateral homonymous hemianopia with macular sparing. An occipital lobe lesion sparing the posterior tips of the occipital lobe usually causes this lesion.
field lens See eyepiece.
motor field See field of fixation.
receptive field The retinal area within which a light stimulus can produce a potential difference in a single cell. Retinal ganglion receptive fields are circular, often with a response different in the centre than in the periphery (also referred to as on-centre/off-centre or centre/surround organization). Ganglion cell receptive fields are very small in the macular region and large in the periphery of the retina. Receptive fields also exist in the lateral geniculate bodies where they are similar to those of the retina. In the visual cortex they have various shapes and sizes and may only respond to either a vertical bar or a black dot moving in a given direction and at a given speed, etc. Receptive fields reflect the interaction between excitation and inhibition between neighbouring neurons. The term can also describe the region of space that induces these neural responses (Fig. F2). See complex cell; hypercomplex cell; simple cell; lateral inhibition; summation.
field stop See diaphragm.
surrounding field That area of the field of view surrounding any object.
field of view The extent of an object plane seen through an optical instrument.
field of view, apparent Angle subtended by the exit port of a sighting instrument or an empty frame aperture at the centre of the entrance pupil of the eye. Syn. apparent peripheral field of view. Note: when referring to the apparent field of fixation, the reference point is the centre of rotation of the eye. Syn. apparent macular field of view (Fig. F3). See field of fixation.
field of view, real Angle subtended by the effective diameter of a lens at the point conjugate with the centre of the entrance pupil of the eye. Syn. real peripheral field of view; true field of view. Note: when referring to the real field of fixation, the reference point is the centre of rotation of the eye. Syn. real macular field of view (Fig. F3). See jack-in-the-box phenomenon.
field of vision See visual field.
visual field (VF) The extent of space in which objects are visible to an eye in a given position. The extent of the visual field tends to diminish with age. The visual field can be measured either monocularly or binocularly. In the horizontal plane meridian the visual field extends to nearly 190º with both eyes open, the area seen binocularly, that is the region where both eyes can see the simulus is about 120º, and the area seen by one eye only is about 154º. Syn. field of vision. See binocular visual field; kinetic perimetry; static perimetry; confrontation test; island of vision.
visual field expander  An optical system designed to enlarge the field of vision. The most common types are reverse telescopes (e.g. looking through the objective of a galilean telescope), which minify objects being viewed but present more information by means of the enlarged visual field. They are usually of low power because of the reduction in visual acuity induced by the minification of the image. Prisms can also be used to expand the visual field. These systems are used mainly to improve mobility in patients with glaucoma and retinitis pigmentosa who have constricted visual fields or tunnel vision. 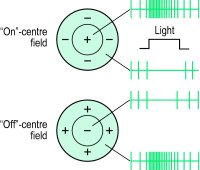 (fēld)
A definite area of plane surface, considered in relation to some specific object.

Q. is there like a big break through in the field of autism therapy and approaching?

A. there is a large amount of research on Autism. Social, neurological, psychiatric etc. today because of new imagine equipment there is better understanding of how our brain works (there are much more to be revealed but still). And there are breakthroughs all the time. You can get updated about research on the subject in this site:
http://www.autism-society.org/site/PageServer?pagename=research_home

A. You are not making use of your mother’s help at the right time. I shall suggest you to discuss your problem with your mom. She can offer you the right support and guidance. I doubt whether she possess experience in the area of your problem. But it is wise to discuss this to your parents. This may also be the reason for you having developed the symptoms of ADHD (not being social). Feel free to discuss with your parents.
More discussions about field

Feedback
Flashcards & Bookmarks ?
Please log in or register to use Flashcards and Bookmarks. You can also log in with
Flashcards ?
My bookmarks ?
+ Add current page to bookmarks
TheFreeDictionary presents:
Write what you mean clearly and correctly.
Mentioned in ?
References in periodicals archive ?
In chapter 3, Brusewitz provides a review of research relating to "biomagnetism, biofields, and holistic biology." He begins with a discussion of animal migration, citing Sheldrake's view that such migrations are based on "morphogenetic fields," as well as other, more orthodox, views regarding the mechanism underlying such migrations.
Conscious Connections: About Parapsychology and Holistic Biology
Sheldrake's morphogenetic fields of Nature has habits and are recombinant according to entanglement with other hierarchies.
INTENTION AND ATTENTION WITHIN SHELDRAKE'S MORPHIC RESONANCE FIELDS IN NATURE AND HUMANS: NETWORK INTERACTION IN WEATHER EYES CLOSED IMAGES DURING RESEARCH AND NON RESEARCH: SIMILAR ARTISTIC AND SCIENTIFIC IMAGES
Nevertheless, the connection to fields of consciousness brought me back to familiar ground once again when Sheldrake's morphogenetic fields were discussed, leading gracefully into the vagaries of Grinberg-Zylberbaum, and the genius of Jung, Wundt, James, and Husserl, but soon taking a turn into odd territory once more.
Near-Death Experiences: Exploring the Mind-Body Connection
Penrose (1989) thus proposes that the mind makes use of non-algorithmic processes, and indeed several non-algorithmic alternatives have been proposed to model the mind's processing, including quantum processes (quantum po tentials, interference patterns, quantum void, quantum computation), topology and morphogenetic fields.
PSI AS A MULTILEVEL PROCESS: SEMANTIC FIELDS THEORY