[of-thal´mo-skōp]
an instrument for examining the interior of the eye.
direct ophthalmoscope one that produces an upright, or unreversed, image of approximately 15 times magnification. The direct ophthalmoscope is used to inspect the fundus of the eye, which is the back portion of the interior eyeball. Examination is best carried out in a darkened room. The examiner looks for changes in the color or pigment of the fundus, changes in the caliber and shape of retinal blood vessels, and any abnormalities in the macula lutea, the portion of the retina that receives and analyzes light only from the very center of the visual field. Macular degeneration and opacities of the lens can be seen through direct ophthalmoscopy. 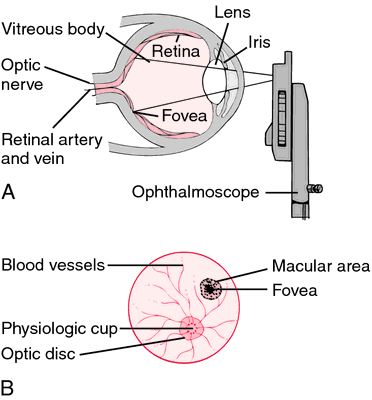 A, Inspection of the eye with a direct ophthalmoscope. B, Structures that are visualized. From Polaski and Tatro, 1996.
indirect ophthalmoscope one that produces an inverted, or reversed, direct image of two to five times magnification. An indirect ophthalmoscope provides a stronger light source, a specially designed objective lens, and opportunity for stereoscopic inspection of the interior of the eyeball. It is invaluable for diagnosis and treatment of retinal tears, holes, and detachments. The pupils must be fully dilated for satisfactory indirect ophthalmoscopy.
scanning laser ophthalmoscope (SLO) an instrument for retinal imaging in which light from a low-power laser beam that scans the retina is reflected back to a sensor; the light detected by the sensor is used to create a full-color composite digital image.
Miller-Keane Encyclopedia and Dictionary of Medicine, Nursing, and Allied Health, Seventh Edition. © 2003 by Saunders, an imprint of Elsevier, Inc. All rights reserved.

(of-thal'mō-skōp),
A device for studying the interior of the eyeball through the pupil.
Synonym(s): funduscope
[ophthalmo- + G. skopeō, to examine]
Farlex Partner Medical Dictionary © Farlex 2012

(ŏf-thăl′mə-skōp′, ŏp-)
n.
An instrument for examining the interior structures of the eye, especially the retina, consisting essentially of a mirror that reflects light into the eye and a central hole through which the eye is examined.
oph·thal′mo·scop′ic (-skŏp′ĭk), oph·thal′mo·scop′i·cal (-ĭ-kəl) adj.
oph′thal·mos′co·py (ŏf′thăl-mŏs′kə-pē, ŏp′-) n.
The American Heritage® Medical Dictionary Copyright © 2007, 2004 by Houghton Mifflin Company. Published by Houghton Mifflin Company. All rights reserved.

(of-thal'mŏ-skōp)
A device for studying the interior of the eyeball through the pupil.
Synonym(s): funduscope.
[ophthalmo- + G. skopeō, to examine]
Medical Dictionary for the Health Professions and Nursing © Farlex 2012

An instrument capable simultaneously of illuminating and allowing observation of the inside of the eye. The direct ophthalmoscope is held as close as possible to the eye; the indirect ophthalmoscope is used at a short distance and requires the use of a separate hand-held image-forming lens.
Collins Dictionary of Medicine © Robert M. Youngson 2004, 2005

An instrument used for viewing the inside of the eye that consists of a concave mirror with a hole in the middle through which the physician examines the eye, and a light source that is reflected into the eye by the mirror.
Mentioned in: Eye Examination, Glaucoma, Papilledema, Physical Examination, Retinal Artery Occlusion, Retinitis Pigmentosa, X Rays of the Orbit
Gale Encyclopedia of Medicine. Copyright 2008 The Gale Group, Inc. All rights reserved.

An instrument for viewing the media and fundus of the eye. It consists essentially of: (1) a light source (a halogen or tungsten bulb), a condenser system, a lens and a reflector (a prism, mirror, or metallic plate) to illuminate the interior of the eye, and (2) a viewing system comprising a sight hole and focusing system (usually a rack of lenses of different powers) to compensate for the combined errors of refraction of the patient and practitioner. See transillumination; Visuscope.
binocular indirect ophthalmoscope (BIO) An indirect ophthalmoscope with a binocular viewing system for obtaining a magnified, inverted, stereoscopic image of the fundus. It consists of a light source mounted above and between the examiner's eyes on a headset. This illuminates a handheld condensing lens of high positive power close to the patient's eyes, which forms an image of the patient's pupil in both of the examiner's pupils. An aerial image of the patient's fundus is formed between the condensing lens and the examiner (if the patient is emmetropic the image will be formed in the focal plane of the condensing lens). It appears inverted and stereoscopically through the oculars attached to the headset. Stereopsis is obtained by reducing the interpupillary distance by means of mirrors or prisms within the headset of the instrument. This ophthalmoscope allows examination of a wide area of fundus and perception of depressed and raised areas (Fig. O1).
confocal scanning laser ophthalmoscope (CSLO) An instrument using a confocal laser system to provide and analyse a three-dimensional image of the optic nerve head, peripapillary retina and macular region. The instrument uses a 670 nm diode laser and measures the amount of light reflected from a series of 16-64 optical sections in depth and reconstructs them to show the topography of the optic nerve head and a measure of the thickness of the retinal nerve fibre layer (RNFL). The RNFL thickness is compared with an age-matched normative database. The instrument is used to analyse RNFL defects, to detect damage to the optic nerve head and progressive changes over time in glaucomatous eyes, as well as retinal oedema, which occurs in the early stages of diabetic retinopathy. Syn. confocal scanning laser tomograph. See glaucoma detection; confocal microscope.
direct ophthalmoscope An ophthalmoscope that provides a virtual, erect image with a magnification of about ✕15 of the fundus, formed by the patient's eye in combination with whatever focusing lenses are needed to correct for the refractive errors of the observer and patient. The instrument is held at close range to the patient's eye and the field of view is small (less than 10º) (Fig. O2). The magnification M of a direct ophthalmoscope is equal to
M = Fe
/4where Fe is the power of the eye. Example: the magnification of the fundus of an aphakic eye of +40.00 D is equal to 40/4 = 10✕.
indirect ophthalmoscope An ophthalmoscope that provides an aerial image of the fundus (and not the fundus itself as with a direct ophthalmoscope), which is real, inverted, with a magnification of ✕5 to ✕7 and formed at approximately arm's length from the practitioner. This aerial image is usually produced by a strong positive lens ranging in power from +13 D to +30 D that is held in front of the patient's eye. The practitioner views this aerial image through a sight hole with a focusing lens to compensate for ametropia and accommodation. This instrument provides a large field of view (25-40º) and allows easier examination of the periphery of the retina. This instrument has been supplanted by the binocular indirect ophthalmoscope. The magnification of an indirect ophthalmoscope M is equal to
M = Fe
/ Fcwhere Fe and Fc are the powers of the eye and of the condensing lens, respectively. Example: using a condensing lens of +15.00 D to view the fundus of an emmetropic eye yields a magnification of 60/15 = 4✕. See fundus camera; inverted image.
scanning laser ophthalmoscope (SLO) An ophthalmoscope that provides a continuous image of the ocular fundus on a TV monitor. It consists of a narrow laser beam, which is scanned horizontally and vertically to produce a rectangular area (called a raster) on the retina. A small beam of light is reflected back out of the eye to a light detector, which monitors the brightness of each point on the raster and relays the information to the corresponding element on a TV monitor where the image can be viewed and/or stored. Low illumination is used to make this procedure more comfortable than conventional photography and mydriatics are usually unnecessary. The field of view extends up to 40 degrees. The instrument has been especially valuable in diagnosing glaucoma and in research.

Fig. O1 Binocular indirect ophthalmoscope. The light source mounted above and between the examiner's eyes illuminates the condenser, which images the source at the periphery of the patient's pupil. The illumination does not overlap the observation beam. The condenser lens is handheld; it forms an inverted aerial image of the retina

(of-thal'mŏ-skōp)
A device for studying the interior of the eyeball through the pupil.
Synonym(s): funduscope.
[ophthalmo- + G. skopeō, to examine]
Medical Dictionary for the Dental Professions © Farlex 2012