Diagnostics
Mabs are used in diagnostics by radioactively labelling them to target malignant cells, detect metastases and screen body fluids for microorganisms, or measure levels of circulating hormones.

Fringe oncology
Alternative healthcare providers may include therapeutic Mabs as a part of treatment.

Immunology
A highly specific antibody formed by a clone of B lymphocytes, either naturally (e.g., in cold haemagglutinin) or produced synthetically by fusing an immortal cell (mouse myeloma) to a cell producing an antibody against a desired antigen.

Oncology
Mabs are increasingly used in cancer management as they directly inhibit the growth of certain tumours, can be chemically bound to toxins that are lethal to malignant cells, stimulate the complement system in destroying malignant cells, can be used to purge the BM of malignant cells, and form the basis for vaccines and drug delivery systems. 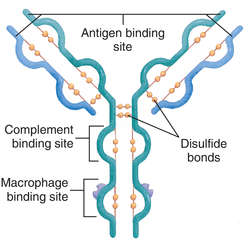 ANTIBODY: Structure of one igG molecule
A substance produced by B lymphocytes in response to a unique antigen. Each Ab molecule combines with a specific antigen to destroy or control it. All antibodies, except natural antibodies (antibodies to different blood types), are made by B cells stimulated by a foreign antigen, typically a foreign protein, polysaccharide, or nucleic acid. Synonym: immunoglobulin See: illustration; antigen; autoantibody; cytokine; isoantibody

Antibodies neutralize or destroy antigens in several ways. They can initiate lysis of the antigen by activating the complement system; neutralize toxins released by bacteria, coating (opsonizing) the antigen or forming a complex to stimulate phagocytosis; promote antigen clumping (agglutination); or prevent the antigen from adhering to host cells.

Abbreviation: AChR-Ab
An autoantibody against acetylcholine receptors in the neuromuscular junction. Binding, blocking, or modulating antibodies against this receptor are found in the blood of most patients with generalized myasthenia gravis and in about half of all patients with ocular forms of the disease.
illustration

An antibody that stimulates or activates an organ. E.g., agonistic antibodies against the thyrotropin receptor in Grave disease stimulate the thyroid gland to release thyroid hormones that produce hyperthyroidism.

Abbreviation: aCLa
An autoantibody against the cell membrane lipid, diphosphatidyl glycerol. It produces abnormal and sometimes life-threatening blood clotting. The antibody is found in a variety of autoimmune and infectious diseases, including in patients with the antiphospholipid antibody syndrome and syphilis.

Abbreviation: anti-CCP
An antibody found in the serum of patients with rheumatoid arthritis but not in those with other joint or soft tissue diseases.

An antibody formed during infection with group A beta-hemolytic streptococci. It is used, retrospectively, to help diagnose recent streptococcal infections.

An antibody that cross-reacts with smooth muscle collagen and the gluten in wheat, found in the serum of people with celiac sprue and some related autoimmune diseases.

An autoantibody present in the serum of patients with a variety of autoimmune diseases, including scleroderma (systemic sclerosis), systemic lupus erythematosus, interstitial lung diseases, and sarcoidosis. They attach to antigens on the cells that line blood vessels and injure those cells, producing blood vessel injury and inflammation (vasculitis).

An autoantibody to the nucleolar protein fibrillarin, found in patients with diffuse systemic sclerosis (scleroderma), esp. those with relatively severe disease. It is identified more often in men than in women with the disease and in people of African descent as opposed to Europeans or Asians.

An antibody formed against the chemical components of nerves, found in the serum of those with Guillain-Barré syndrome.

An antibody formed against the gluten in wheat, found in the serum of people with celiac sprue.

Any antibody found in plasma that, when donated and infused into a recipient, damages the recipient's white blood cells. Leukocyte injury after plasma exchange or infusion is the event that triggers transfusion-related acute lung injury.

An autoantibody associated with paraneoplastic encephalomyelitis. It is also known as ANNA-1 (antineuronal nuclear antibody-1).

An autoantibody found in the plasma of patients with thyroid injury, e.g., in several forms of thyroiditis and other rheumatologic or autoimmune diseases.

Abbreviation: ANNA
Any of several antibodies that bind to neuronal targets in the cerebrum and cerebellum, producing paraneoplastic neurological dysfunction. The antibodies are typically released by cancers such as small-cell carcinoma of the lung (also known as ANNA-1 and ANNA-2), testicular cancer (anti-Ta antibody), or breast cancer (ANNA-2).

Abbreviation: ANCA
An autoantibody found in the blood of patients with certain forms of vasculitis (such as Churg-Strauss syndrome, microscopic polyangiitis, Wegener granulomatosis) esp. when it affects small blood vessels.

Abbreviation: ANA
Any of a group of autoantibodies that react against normal components of the cell nucleus. These antibodies are present in a variety of immunologic diseases, including systemic lupus erythematosus, progressive systemic sclerosis, Sjögren syndrome, scleroderma, polymyositis, and dermatomyositis, and in some patients taking hydralazine, procainamide, or isoniazid. In addition, ANA is present in some normal people. Tests for ANAs are used in the diagnosis and management of autoimmune diseases.

Abbreviation: aPLa
Any of a group of immunoglobulin autoantibodies that react with phospholipids, which are one of the primary components of the cell membrane (the other components are glycolipids and steroids). These antibodies are found in patients with a variety of connective tissue and infectious disorders, including systemic lupus erythematosus, the antiphospholipid antibody syndrome, syphilis, and malaria. They cause abnormal blood clotting, thrombocytopenia; and in women of childbearing age, repeated miscarriages. The anticardiolipin antibodies are one type of antiphospholipid antibody.

Abbreviation: anti-PCNA
An antibody found in the blood of patients with diseases in which cells replicate rapidly. Such conditions include autoimmune and inflammatory diseases and malignancies.

An antibody that reacts with the antigen receptor on a cell rather than with an antigen itself.

An autoantibody found in patients with systemic lupus erythematosus, esp. those with neurological or psychiatric manifestations of the disorder.

An antibody that reacts with striated muscle cells. It is found principally in people with myasthenia gravis who also have thymoma.

An autoantibody found in the serum of patients with progressive systemic sclerosis, silicosis, and systemic lupus erythematosus. Higher levels of the antibody correlate with worsening kidney, lung, and skin disease.
Synonym: anti-scl-70 antibody

An antibody that prevents an antigen from binding with a cellular receptor.

An antibody that lyses cells by binding to a cellular antigen and activating complement or killer cells.

Abbreviation: FA
An antibody that has been stained or marked by a fluorescent material. The fluorescent antibody technique permits rapid diagnosis of various infections.

Abbreviation: GADA
An antibody to glutamic acid decarboxylase. It is a serum marker of type 1 diabetes mellitus and is found in the blood of patients with stiff-person syndrome.

An antibody produced by immunization or as a result of transfusion of incompatible blood.

An antibody produced by the mother and transferred to the fetus in utero or during breastfeeding.

Abbreviation: PRA
A measure of an organ transplant recipient's level of sensitization to antigens on donated organs. It is the percentage of cells taken from a broad selection of blood donors against whose antigens the organ recipient's serum reacts. The higher the panel reactive antibody, the more challenging it is to match a donor organ to the recipient.

An antibody that reacts with many different antigens.

An antibody produced in response to an infectious disease. See: immunity

A monoclonal antibody to which a radioisotope has been attached. The antibody attaches to receptors on the surface of undesired cells (e.g., cancer cells) and delivers a dose of radiation directly to those cells, leaving healthy cells and tissues relatively unaffected.

A monoclonal antibody to which a cell-killing drug has been attached. The antibody combines preferentially with receptors on undesired cells (such as cancer cells) and delivers its lethal drug to those cells but not to healthy cells and tissues. To increase their effectiveness and decrease immune responses to these cells, genes for antigen binding sites from human antibodies are added, creating humanized monoclonal antibodies.