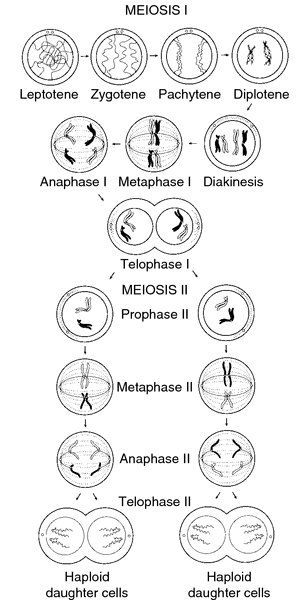 Meiosis (only two of the 23 human chromosome pairs are shown, the chromosomes from one parent in black, those from the other parent in outline). From Dorland's, 2000.
Miller-Keane Encyclopedia and Dictionary of Medicine, Nursing, and Allied Health, Seventh Edition. © 2003 by Saunders, an imprint of Elsevier, Inc. All rights reserved.

(mī-ō'sis), Do not confuse this word with miosis.
A special process of cell division comprising two nuclear divisions in rapid succession that result in four gametocytes, each containing half the number of chromosomes found in somatic cells.
Synonym(s): meiotic division
[G. meiōsis, a lessening]
Farlex Partner Medical Dictionary © Farlex 2012

(mī-ō'sis)
A special process of cell division comprising two nuclear divisions in rapid succession that result in four gametocytes, each containing half the number of chromosomes found in somatic cells.
Medical Dictionary for the Health Professions and Nursing © Farlex 2012

(mi-o'sis) [Gr. diminution]
A process of two successive cell divisions, producing cells, egg or sperm, that contain half the number of chromosomes (haploid) in somatic cells. When fertilization occurs, the nuclei of the sperm and ovum fuse and produce a zygote with the full chromosome complement (diploid).
See: illustration; chromosome; mitosis; oogenesis
Medical Dictionary, © 2009 Farlex and Partners

The process in the formation of the sperms (spermatozoa) and eggs (ova) in which chromosomal material undergoes recombination (meiosis I) and the chromosomes are reduced to a single set of 23 (haploid number) instead of the normal 23 pairs (meiosis II). This allows the restoration of the normal number when the spermatozoon fuses with the ovum. See also MITOSIS.
Collins Dictionary of Medicine © Robert M. Youngson 2004, 2005

(mī-ō'sis)
Special process of cell division comprising two nuclear divisions in rapid succession that result in four gametocytes, each containing half the number of chromosomes found in somatic cells.
Medical Dictionary for the Dental Professions © Farlex 2012