[sēr´ēn]
a naturally occurring, nonessential amino acid, used as a dietary supplement, in biological studies and tests, and in culture media.

(ser'ēn),
2-Amino-3-hydroxypropanoic acid; the l-isomer is one of the amino acids occurring in proteins.

(sĕr′ēn′)
n.
An amino acid, C3H7NO3, that is a common constituent of many proteins.

(S) (sĕr'ēn)
One of the amino acids occurring in proteins.

A non-essential amino acid found as a component of most proteins. It is a precursor of choline, glucine, cysteine and pyruvate. Serine is present in most diets but most of the body serine is synthesized. 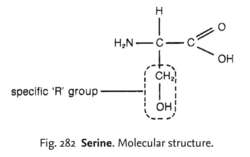 one of 20 AMINO ACIDS common in proteins. It has a polar ‘R’ group structure and is soluble in water. See Fig. 282 . The ISOELECTRIC POINT of serine is 5.7.

(sĕr'ēn)
One of the amino acids occurring in proteins.