Central pathways of metabolism: How the body produces energy from the energy-containing nutrients using the tricarboxylic acid cycle. From Davis and Sherer, 1994.
urea cycle a cyclic series of reactions that produce urea; it is a major route for removal of the ammonia produced in the metabolism of amino acids in the liver and kidney.

[men´stroo-al]
pertaining to menstruation.
menstrual cycle the regularly recurring physiologic changes in the endometrium that culminate in its shedding (menstruation). Menstrual cycles vary in length, with the average being about 28 days. The length of time of menstrual flow is also variable, with an average of about 5 days. Women menstruate from puberty to menopause, except during pregnancy. The first 14 days of the cycle are called the follicular phase; a follicle containing an ovum is developing in one of the ovaries. It begins as the menstrual flow ceases; the lining of the uterus is stimulated by estrogen and begins to increase in thickness to prepare for the possibility of reproduction. On the twelfth or thirteenth day of the cycle, the ovulatory phase begins with a surge in levels of luteinizing hormone and follicle-stimulating hormone; ovulation then takes place and the ovary discharges the ovum. The ruptured follicle is transformed into a yellowish material called the corpus luteum; the luteal phase begins as the corpus luteum secretes progesterone. Progesterone acts on the endometrium, building up tissues with an enriched supply of blood to nourish the future embryo. If fertilization and conception do not take place, the estrogen level in the blood falls, the endometrium is no longer stimulated, and the uterus again becomes thinner. Blood circulation slows, blood vessels contract, and the menstrual phase begins; unused tissue breaks down into the bloody discharge known as menstruation. The cycle then starts again. 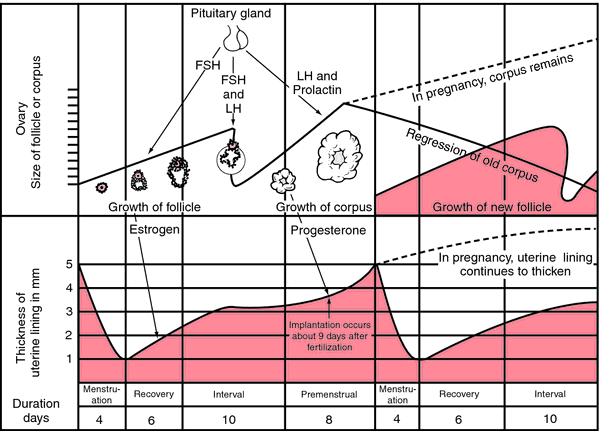 Average 28-day menstrual cycle. The cycle begins when hormones from the pituitary gland stimulate the development of an egg in a follicle inside one of the ovaries. About the fourteenth day, ovulation occurs: The follicle bursts, and the egg is discharged from the ovary. If the egg is not fertilized, the cycle ends in menstruation on the twenty-eighth day. If the egg is fertilized, pregnancy begins.
Miller-Keane Encyclopedia and Dictionary of Medicine, Nursing, and Allied Health, Seventh Edition. © 2003 by Saunders, an imprint of Elsevier, Inc. All rights reserved.

the period in which an ovum matures, is ovulated, and enters the uterine lumen through the fallopian tubes; ovarian hormonal secretions effect endometrial changes such that, if fertilization occurs, nidation will be possible; in the absence of fertilization, ovarian secretions wane, the endometrium sloughs, and menstruation begins; this cycle lasts an average of 28 days, with day 1 of the cycle designated as that day on which menstrual flow begins. Compare: endometrial menstrual cycle.
Farlex Partner Medical Dictionary © Farlex 2012

A monthly cycle that occurs in women from menarche (the first onset of menstruation) to menopause (the cessation of thereof), which is measured from the beginning of one menstrual period to the beginning of the next, ±28 days. The menstrual cycle is characterised by changes in hormone levels and physical changes in the endometrium, and prepares the latter for implantation of an embryo.
Segen's Medical Dictionary. © 2012 Farlex, Inc. All rights reserved.

(men'strū-ăl sī'kĕl)
The period in which an oocyte or ovum matures, is ovulated, and enters the uterine lumen through the uterine tube; ovarian hormonal secretions effect endometrial changes such that, if fertilization occurs, nidation will be possible; in the absence of fertilization, ovarian secretions wane, the endometrium sloughs, and menstruation begins; this cycle lasts an average of 28 days, with day 1 of the cycle designated as that day on which menstrual flow begins.
Medical Dictionary for the Health Professions and Nursing © Farlex 2012 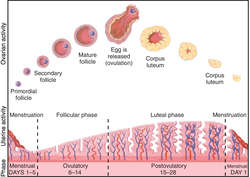 the modified OESTROUS CYCLE of most primates, which results in the periodic destruction of the mucosa of the uterine wall at the end of the LUTEAL PHASE.

This results in a discharge of blood known as menstruation, the shedding of the ENDOMETRIUM, every 28 days in women.

A hormonally regulated series of monthly events that occur during the reproductive years of the human female to ensure that the proper internal environment exists for fertilization, implantation, and development of a baby. Each month, a mature egg is released from the follicle of an ovary. If an egg is released, fertilized, and implanted, the lining of the uterus continues to build. If fertilization and/or implantation does not occur, the egg and all of the excess uterine lining are shed from the body during menstruation.
Mentioned in: Human Chorionic Gonadotropin Pregnancy Test
Gale Encyclopedia of Medicine. Copyright 2008 The Gale Group, Inc. All rights reserved.

(men'strū-ăl sī'kĕl)
The period in which an oocyte matures, is ovulated, and enters the uterine lumen through the uterine tube; ovarian hormonal secretions effect endometrial changes such that, if fertilization occurs, nidation will be possible; in the absence of fertilization, ovarian secretions wane, the endometrium sloughs, and menstruation begins; this cycle lasts an average of 28 days, with day 1 of the cycle designated as that day on which menstrual flow begins.
Medical Dictionary for the Dental Professions © Farlex 2012

A. polycystic ovarian syndrome is when the egg does not come out- so i guess there is no menstrual that month. but as far as i know it's not every month that an egg decides to stay at home after 18... i guess you can check up more exact at this site:
http://www.pcosupport.org/
More discussions about menstrual cycle
This content is provided by iMedix and is subject to iMedix Terms. The Questions and Answers are not endorsed or recommended and are made available by patients, not doctors.