[mĕ-dul´ah] (L.)
1. the inmost part of a structure or organ.
2. medulla oblongata.
3. marrow. adj., adj med´ullary.
adrenal medulla the inner portion of the adrenal gland, where epinephrine and norepinephrine are produced.
medulla of bone bone marrow.
medulla oblonga´ta that part of the hindbrain continuous with the pons above and the spinal cord below; it houses nerve centers for both motor and sensory nerves, where such functions as breathing and the beating of the heart are controlled. See also brain.
medulla os´sium bone marrow.
renal medulla the inner part of the substance of the kidney, composed chiefly of collecting tubules, and organized into a group of structures called the renal pyramids.
medulla spina´lis (medulla spina´lis) spinal cord.
medulla of thymus the central portion of each lobule of the thymus; it contains many more reticular cells and far fewer lymphocytes than does the surrounding cortex.

n.
The inner, reddish-brown portion of the adrenal glands that synthesizes, stores, and releases epinephrine and norepinephrine.

The centre of the adrenal gland, which is a neuroendocrine “organ” which produces catecholamines (epinephrine/adrenaline & norepinephrine/ noradrenaline) in response to stress signals from the peripheral nervous system. 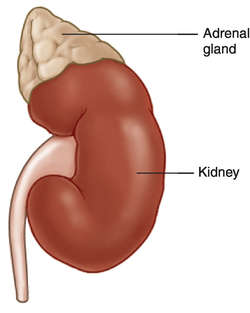 The inner part of the ADRENAL GLAND that secretes the hormones ADRENALINE and noradrenaline. The secreting cells are called chromaffin cells. See also ADRENAL CORTEX.

The inner part of the adrenal gland. The adrenal medulla produces the hormones epinephrine (adrenaline), which stimulates the heart, tightens blood vessels, and relaxes some smooth muscles; and norepinephrine, which has similar effects.
Mentioned in: Adrenal Gland Scan, Pheochromocytoma, Vasodilators