A ubiquitous immune surveillance cell, which is larger than basophils, with irregular and frequently elongated spindle shapes and cytoplasmic extensions. Mast cell (MC) nuclei are round and usually visible among the granules, which may overlay the edges of the nucleus slightly; the cytoplasm is usually packed with black or bluish-black metachromatic granules. MCs have a long—months to years—lifespan, in contrast to other “nonspecific” immune cells, such as PMNs (hours) or macrophages (weeks to months); they proliferate at the site of inflammation, have receptors for CR3 (complement), FcγR (IgG) and FcεR (IgE). 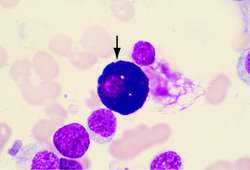 A large tissue cell resembling a basophil, which is essential for inflammatory reactions mediated by immunoglobulin E (IgE) but does not circulate in the blood. Mast cells are present throughout the body in connective tissue, but are concentrated beneath the skin and the mucous membranes of the respiratory and digestive tracts. Mast cells are covered with IgE molecules, which bind with foreign antigens and stimulate degranulation, releasing such mediators as histamine, prostaglandins, leukotrienes, and proteinases from densely packed granules within the cytoplasm. These mediators produce type I (immediate) hypersensitivity reactions (e.g., urticaria, allergic rhinitis, asthma, angioedema, and systemic anaphylaxis). See: illustration
See also: cell
Medical Dictionary, © 2009 Farlex and Partners

A connective tissue cell found in large numbers in the skin and mucous membranes and in the lymphatic system. The mast cell plays a central part in allergic reactions. It contains numerous large granules-collections of powerfully irritating chemical substances such as HISTAMINE; SEROTONIN; HEPARIN; the proteases tryptase and chymase; CYTOKINES; PROSTAGLANDINS; and LEUKOTRIENES. In people with allergies, the antibody (immunoglobulin), IgE, remains attached to specific receptors on the surface of the mast cells. When the substance causing the allergy (the ALLERGEN) contacts the IgE, the mast cell is triggered to release these substances and the result is the range of allergic symptoms and signs. CHROMOGLYCATE can stabilize the mast cell membrane and prevent the release of the contents. Mast cells closely resemble blood basophil cells, and the latter also carry receptors for IgE. The mast cell has recently emerged as an important element in the inflammatory events leading to joint damage in RHEUMATOID ARTHRITIS. See also ATOPY.
Collins Dictionary of Medicine © Robert M. Youngson 2004, 2005

A cell found in connective tissue that releases substances such as heparin and histamine in response to injury or inflammation of bodily tissues.
Mentioned in: H-2 Blockers
Gale Encyclopedia of Medicine. Copyright 2008 The Gale Group, Inc. All rights reserved.

Feedback
Flashcards & Bookmarks ?
Please log in or register to use Flashcards and Bookmarks. You can also log in with
Flashcards ?
My bookmarks ?
+ Add current page to bookmarks
Mentioned in ?
References in periodicals archive ?
Negative correlations have been registered between the values of EPG and mastocytes [4] and between these cells and the parasitic burden [42].
Furthermore, there was a significant reduction in mastocyte and eosinophil numbers in mucosa and lower levels of specific anti-H.
Relacion Haemonchus contortus-ovino: una revision
Murine mastocytes express the mRNA of TLRs 1-4 and 6-9 but not TLR5 [32-36].
In three different mouse models, where TLR3, TLR4, and TLR7 were specifically deleted in mastocytes, the recruitment of effector [CD8.sup.+] T cells, neutrophils, and dendritic cells, respectively, was totally avoided after agonist stimulation [33, 42, 43].
The activation and migration of mastocytes occur in several neurologic disorders including MS [46, 47], PD [48], amyotrophic lateral sclerosis (ALS) [49, 50], AD [51], traumatic injury [52], ischemic and hemorrhagic stroke [53, 54], and viral infections [55].
Mastocytes release several cytokines in response to TLR2 activation including TNF-[alpha]lpha, IL-4, IL-5, IL-6, and IL-13.
It is interesting to note that mastocytes but not microglia have been described to be the first responder in CNS injuries, such as perinatal hypoxia-ischemia.
Cx HCs and Panxl Channels in Glial Cell and Mastocytes
In neuroinflammatory conditions, the successive activation of different glial cells via HCs has been partially demonstrated [125, 126], and mastocytes are likely to be involved in early steps of different pathological conditions (Figure 1).
As mentioned previously, the degranulation response of mastocytes is an early and rapid response and might require precise coordination where HCs could be essential.
Moreover, mastocytes represent an abundant source of ATP stored in granules that are released under activation conditions [196-198] such as specific (e.g., IgE + antigen) and nonspecific stimulation (e.g., stress, mechanic stimulation, and osmotic swelling).
Activation of Glial Cells and Mastocytes during Stress and Infection
Possible involvement of TLRs and hemichannels in stress-induced CNS dysfunction via mastocytes, and glia activation