[ak″ro-meg´ah-le]
excessive enlargement of the limbs due to thickening of bones and soft tissues, caused by hypersecretion of growth hormone, usually from a tumor of the pituitary gland. In adults whose bone growth has stopped, the bones most affected are those of the face, jaw, hands, and feet (see accompanying illustration). 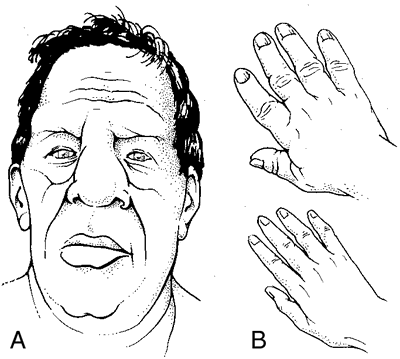 Appearance in acromegaly: A, facial appearance; B, acromegalic hand (upper) and normal hand (lower). From Dorland's, 2000.
Gradual enlargement of paranasal sinuses, prominence of nose and supraorbital ridges, prognathism, widely separated teeth, and an underbite are part of the coarsening of facial features. Early signs include increased metabolism and strength and profuse sweating. Later joint pain, weakness, and sometimes diabetes mellitus and visual disturbances are seen. In children overproduction of growth hormone stimulates growth of long bones and results in gigantism. Surgical treatment includes removal of the tumor or the pituitary gland (transsphenoidal hypophysectomy), pituitary irradiation, or a combination of the two. Drug therapy with the dopamine receptor agonist bromocriptine may be used as adjuvant therapy in conjunction with either surgery or radiation.
Miller-Keane Encyclopedia and Dictionary of Medicine, Nursing, and Allied Health, Seventh Edition. © 2003 by Saunders, an imprint of Elsevier, Inc. All rights reserved.