(pē'nis, pē'nēz, pē'nis-ez), [TA]
The organ of copulation and urination in the male; formed of three columns of erectile tissue, two arranged laterally on the dorsum (corpora cavernosa penis) and one median ventrally (corpus spongiosum penis); the urethra traverses the latter; the extremity (glans penis) is formed by an expansion of the corpus spongiosum and is more or less completely covered by a free fold of skin (prepuce).
Synonym(s): intromittent organ, membrum virile, phallus (2) , priapus, virga
[L. tail]
Farlex Partner Medical Dictionary © Farlex 2012

, pl. penes, penises (pē'nis, -nēz, -ni-sĕz) [TA]
The organ of copulation in the male; it is formed of three columns of erectile tissue, two arranged laterally on the dorsum (corpora cavernosa penis) and one median below (corpus spongiosum); the urethra traverses the latter; the extremity (glans penis) is formed by an expansion of the corpus spongiosum, and is more or less completely covered by a free fold of skin (preputium).
[L. tail]
Medical Dictionary for the Health Professions and Nursing © Farlex 2012 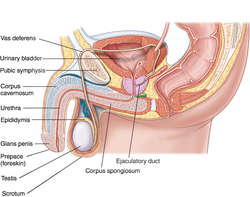 The male organ of copulation containing the URETHRA through which urine and seminal fluid pass. The normally flaccid penis becomes enlarged and erect by virtue of three longitudinal cylindrical bodies of spongy tissue into which blood can flow under pressure under the influence of sexual excitement or other stimuli. One of these bodies, the corpus spongiosum, surrounds the urethra. The other two, the corpora cavernosa, lie side by side above the corpus spongiosum. Erection physiology is mediated partly by nitric oxide.
Collins Dictionary of Medicine © Robert M. Youngson 2004, 2005

the copulatory organ of a male animal which conveys the sperm to the genital tract of the female.
Collins Dictionary of Biology, 3rd ed. © W. G. Hale, V. A. Saunders, J. P. Margham 2005

A. i'm no expert on this...but i wouldn't worry about it too much, if it looks fine erect and doesn't hurt - it's all good. and unless you plan to run naked in barbwired field- it won't give you any problem. i guess it's the body reaction to excess usage, like your body gaining hight if playing basketball while growing.
More discussions about penis
This content is provided by iMedix and is subject to iMedix Terms. The Questions and Answers are not endorsed or recommended and are made available by patients, not doctors.