[as″pĭ-ra´shun]
inhalation of some foreign material; aspiration of vomitus, blood, or mucus may occur when a person is unconscious or under the effects of a general anesthetic, and can be avoided by keeping the head turned to the side and removing all such foreign material from the air passages. 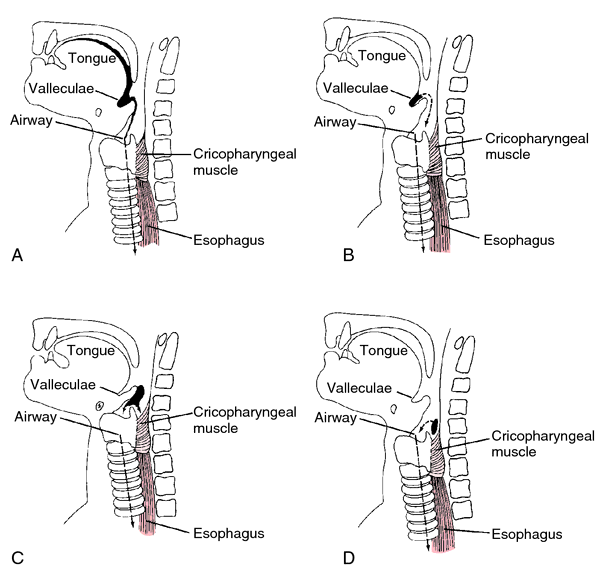 A, Types of aspiration. A, Aspiration before swallow caused by reduced tongue control. B, Aspiration before swallow caused by absent swallow response. C, Aspiration during swallow caused by reduced laryngeal closure. D Aspiration after swallow caused by pooled material in pyriform sinuses overflowing into airway. From Logemann J: Evaluation and Treatment of Swallowing Disorders, San Diego, College-Hill Press, 1983.
withdrawal of fluid by an aspirator; the method is widely used in hospitals, especially during surgery, to drain the area of the body being operated on and keep it clear of excess blood and other fluids to facilitate visualization of the surgical field. Sometimes after extensive surgery, suction drainage under the skin is used to speed the healing process.
meconium aspiration inhalation of meconium by the fetus or newborn, which may result in atelectasis, emphysema, pneumothorax, or pneumonia.
risk for aspiration a nursing diagnosis accepted by the North American Nursing Diagnosis Association, defined as a state in which an individual is at risk for entry of gastric secretions, oropharyngeal secretions, solids, or fluids into the tracheobronchial passage.
vacuum aspiration a form of induced abortion in which the uterine contents are removed by application of a vacuum through a hollow curet or a cannula introduced into the uterus.

n.
A method of abortion performed during the first trimester of pregnancy in which the contents of the uterus are withdrawn through a narrow tube. Also called suction curettage, vacuum curettage.

Evacuation of the contents of the uterus by a curet or catheter attached to a suction apparatus. The procedure is performed before the 12th week of gestation. It is the most common form of surgical abortion. Synonym: suction aspiration
See also: aspiration